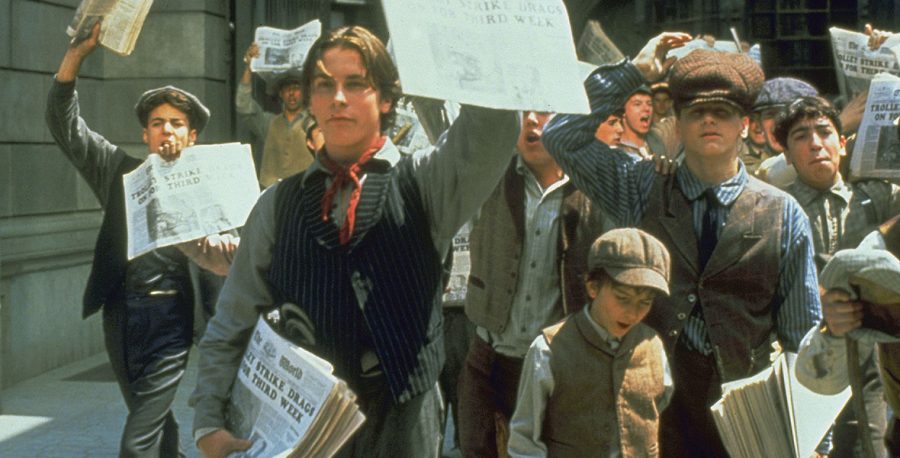 Jack Kelly and his other newsies spreading awareness of the strike of newspaper boys, demonstrating the power of the press, protest, and the voice of the people.

As a period piece, most movies drive themselves to portray their respective scenes with astounding accuracy. In Kenny Ortega’s Newsies, even if the 1890s in urban New York were not nearly as musical as the movie describes it as, the movie addresses pressing issues of the time such as child labor, strikes, and pressures on the press adding an educational element to this wonderfully choreographed musical.

The movie starts off with orphan boys, including main protagonist Jack Kelly (Christian Bale), waking up in what looks like a hostel to start off their day. The boys are what is known as the “Newsies”; they get by in this city by buying papers from Joseph Pulitzer’s, (Robert Duuval) paper “The World”, and selling them. At this point in time, Pulitzer clashes with another publisher, William Randolph Hearst. In order to increase revenue, Pulitizer decides to increase distribution costs, making the Newsies pay more for papers, earn less from selling papers, and making their life harder. This leads to a strike against the press, during which the newsies of New York unite. The rest of the movie revolves around the trials and tribulations of Jack Kelly and his internal conflict between going out west and helping the newsboys.

Kenny Ortega, known for other musicals such as the iconic High School Musical and other Disney Channel originals, continues to show off his ability to encapsulate an audience through song and dance.  The actor for Joe Pulitizer is very adept in his role; we no longer see the man who was a pioneer of the press and has an award in his name to be antagonistic. He is able to deliver a performance that compels us to hate him, giving us two sides of his story.