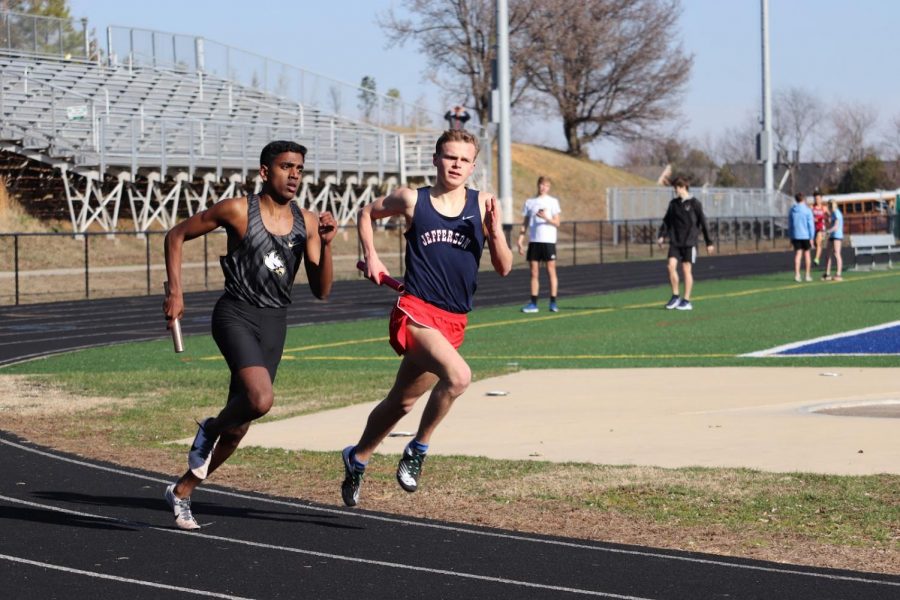 Sprinting down the track, senior Tucker Stanley competes in the 4x800 relay

Closing out the winter season, the Jefferson track team competed at Boo Williams Sportsplex on March 2 for the states track meet.

Stanley and Moyar were able to secure fourth place finishes in the 3200-meter run and the 1000 meter run respectively.

“I was very happy with getting fourth place in the 1000. I wasn’t really expecting to do that considering I was 15th in preliminary seeding, but I managed to shave two seconds off my [personal record] and ended up getting a medal, which was awesome. And then [with] the 4 x 800-meter relay, I really felt good about my performance as well. In the end, it was the 1000 meter run that I definitely think I did best,” Moyar said.

Moyar attributes his success to his team’s support and camaraderie.

“I would say it has a very positive effect — just seeing how other people train and using that to change the way you train. It sort of gives you a reason to run [because] times aren’t like a huge motivator to run,” Moyar said. “Being with this group and always going on runs with them is pretty fun. It gives [track] a meaning.“

With the winter season coming to an end, Stanley shares his excitement for the spring season.

“Well, it was pretty short because we started late because we went to like a big meet at the end of cross country, but I think this season, in general, is pretty good. I’m excited about the outdoor season,” Stanley said.