When a Computer Controls Everything 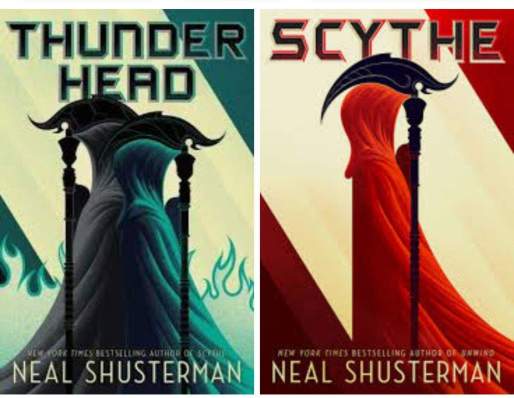 In the Arc of a Scythe trilogy, the first book, Scythe, is followed by Thunderhead, a novel where death occurs in a controlled manner. Photo courtesy of Vanessa Fowler.

When a Computer Controls Everything

Imagine living in a world run by a computer that sees everything and knows everything. Would you trust it? Thunderhead, the second book of the Arc of a Scythe trilogy by Neal Shusterman challenges readers to do just that.

Thunderhead takes place in a world where death has been eradicated, except for the carefully controlled death by Scythes, trained assassins who aid in keeping the world’s population under control. The plot picks up after the chaotic ending of Scythe, the first book in the trilogy.

I found that the Thunderhead, like Scythe, had an underlying theme that made the story more interesting to follow. For example, I was interested in the ethics of Scythe’s actions, taking lives for the greater good to manage the population.

I liked how the story featured small excerpts from the Thunderhead, the supercomputer that governs the world in the future. I also liked how the plot alternated between the protagonists Citra and Rowan.The alternating character points of view and excerpts from the Thunderhead helped to pace the story, and give the readers a break if they chose to read multiple chapters at once.

The excerpts from Thunderhead’s consciousness also helped in part to explain some of the future events that happened in the following chapters.They also gave the Thunderhead a voice. Whether or not readers agree with the Thunderhead, AI so advanced it has its own consciousness, having complete control, readers are better able to sympathize with it

My only complaint is that the pickup from the cliffhanger at the end of the first book ignored the fact one major character reappeared, but then disappeared again by the start of Thunderhead. The reveal at the end of Scythe was a shocking and welcome feature, given that Rowan and Citra were reaching an important crossroad in their life and both needed guidance.

Like the previous book in the series, Thunderhead ends on a dramatic cliffhanger. The book was an enjoyable read, and gave the reader a bit to think about after. It left me wondering just how long it would be until the finale of the trilogy came out.