A changing school, a constant teacher 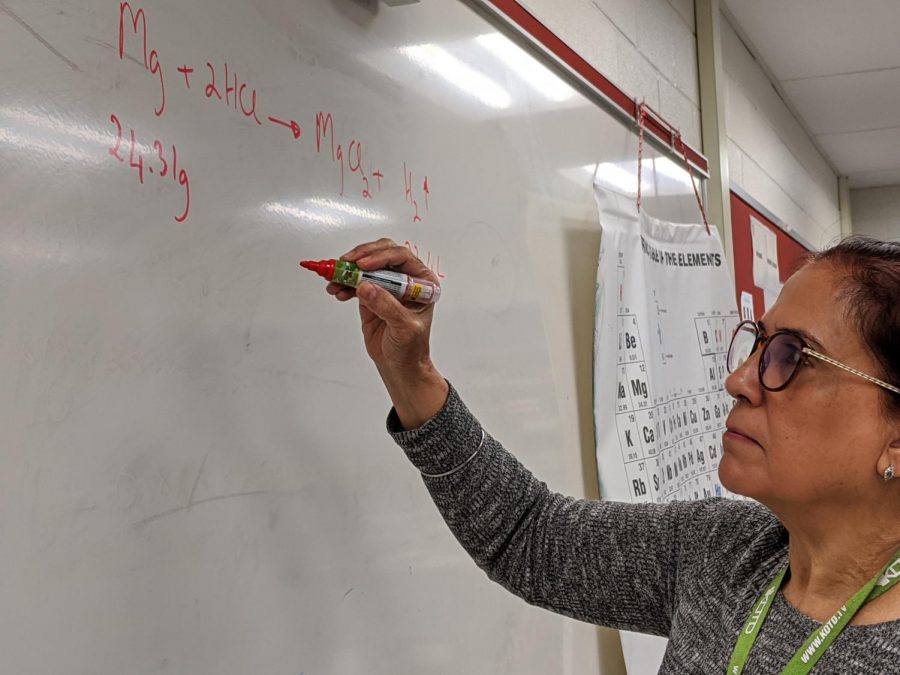 This school year marks the 35th year of Sandra Chhabra's education career, as well as the 33rd of her career at Jefferson. Originally, Chhabra worked in the biotechnology lab and gradually made her way back to chemistry. "We'd be doing things like plating, cloning African Violets, working with E. coli and seeing different types of bacteria. Now I teach chemistry and from what I see, it's a really good experience."

A career in education can begin in several ways. For current Jefferson chemistry teacher Sandra Chhabra, it all began with a plate of cookies and a long term substitute teaching job in 1985.

Chhabra first came to Jefferson as a long-term substitute for the Chemistry department. After working in other Fairfax County high schools since 1984, Chhabra felt comfortable in the Jefferson environment. Her students also responded well to her teaching style, as proven by the test she gave as the permanent teacher at the time had scheduled.

“I gave a test, and one of my students came in the next day with a bunch of cookies,” Chhabra said. “[My student] said,‘Mrs. Chhabra, this is the first time I passed my chemistry test.’”

Other students experienced similar results thanks to Chhabra’s teaching. They tried to convince her to get a permanent teaching job at Jefferson, to which Chhabra agreed. She began her tenure at Jefferson in 1986 and it still continues to this day.

“Because the kids were so positive, I decided that was the way to go,” Chhabra said. “So I went and made an appointment with the secretary to get interviewed by the assistant principal and it happened.”

Chhabra originally started teaching in the biotechnology lab, which has become a less frequent choice among students with heightened interest in computer technology.

Having taught at Jefferson for over three decades, the enrollment in certain senior research laboratories is not the only change Chhabra has noticed. The way Jefferson students are exposed to different senior research opportunities has also changed dramatically.

Despite these more gradual shifts, along with the renovation completed in 2017, other aspects of Jefferson have remained the same.

“I think the math department is very much the force that it was even before the start [of the STEM program],” Chhabra said. “I think that’s because they really make the students do a lot of practice work so they get really good at the problems. Our physics department is also really strong, and I’ve heard students say that about [the chemistry department] as well.”

Chhabra was originally drawn to Jefferson by the positivity of her students, and it is what has kept her here for the majority of her teaching career. Chhabra continues to find this attitude in Jefferson students today, one thing about the school that she hopes will never change.

“I think it’s always a pleasure to have such great students come in year after year,” Chabbra said. “This year my students are really sharp cookies so I’m very happy.”