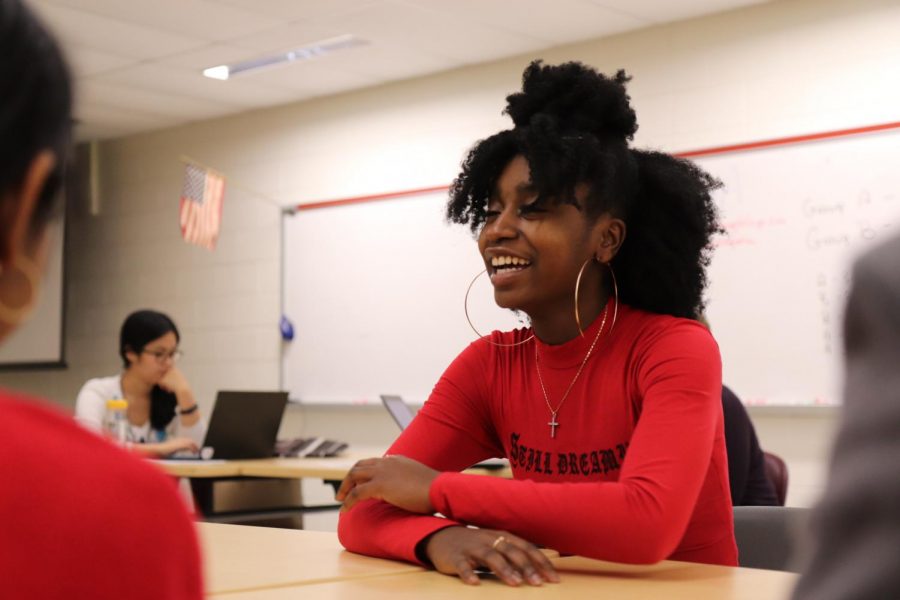 Kimberly Boateng consults students about issues they face at Jefferson. FCPS School Board Student Representative and junior at South Lakes High School, Boateng has visited multiple schools across Fairfax County in hopes of better representing all FCPS students. “Our county is so big and unfortunately that means if we are not making our voices heard then they’re likely not going to be considered. It is so important for students to get involved so I’m hoping that I can inspire students to do so by visiting,” Boateng said.

At an SGA-run forum on Friday, Feb. 28, Jefferson students shared their input on FCPS policy with the FCPS School Board Student Representative, Kimberly Boateng.

The event was held both blocks during 8th period with the purpose of allowing all students to advocate for their issues and share suggestions to improve FCPS policy. Boateng began the sessions by introducing herself and her position before letting students split into groups and discuss.

“She came around and asked us what we thought we needed to fix the school and county. Now she has an idea of what needs to be fixed, specifically in our school, and can help us get better,” freshman Prasidha Padmanabhan said.

Boateng encouraged students to speak up about all issues they face at Jefferson.

“Two of the biggest issues I’ve heard are community and culture. We do have students who deal with a lot of stress and lack of sleep and this all builds poor mental health habits. There’s also a culture of competition,” senior and SGA president Ronith Ranjan said.

The SGA hopes advocating to the school board’s student representative can directly influence FCPS policy in areas specific to Jefferson.

“The other big thing is technology, with FCPSOn being introduced this year. TJ is one of the best high schools in America, and to be the number one, we need access to technology and innovation. It’s important that we have these conversations with people who run FCPSOn,” Ranjan said.

Another reason for the event was to promote a leadership opportunity: the FCPS School Board Student Representative position for the next school year.

Boateng will not be running for student representative next year in order to give other students the chance.

“I like the sense of informing the county so I actually might [run for student representative]. I asked for the info so I’ll see but I kind of want to,” Padmanabhan said.

Boateng recommends that everyone tries, because she herself did not expect to be appointed student representative.

“You frankly never know what’s going to happen. I never thought I’d be where I am right now,” Kimberly Boateng said. “If someone feels they have a passion for what goes on behind the scenes in our county, I encourage them to at least try it out. You don’t lose anything for running and you’ll likely meet a bunch of great people.”