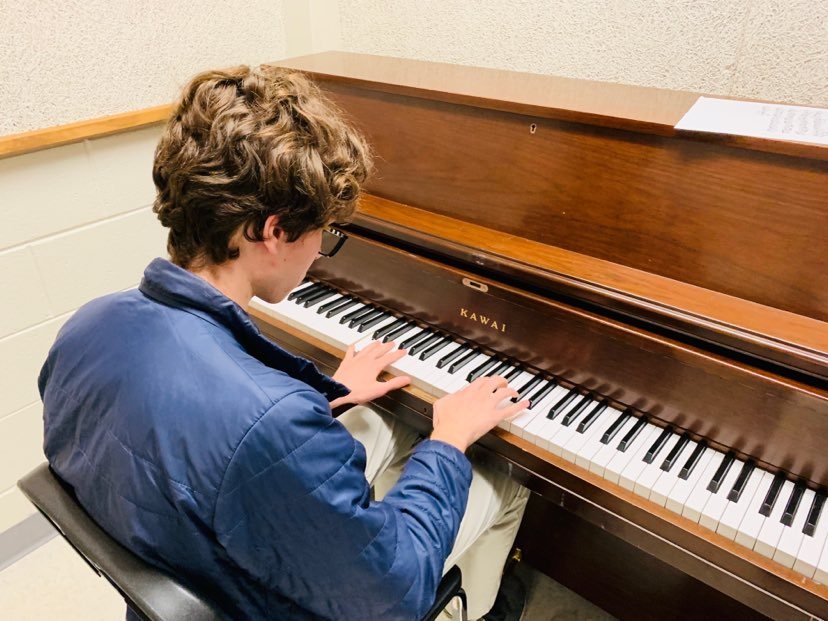 Pressing down on the piano keys, senior Robert Crotts improvs a slow melody

Fingers gliding across the keys, notes ring out, creating melodies planned only seconds ago. Even with no sheet music or memorized beat to follow, senior Robert Crotts generates music on the spot, with little to suggest that the natural movement of his hands across the piano is spontaneous. For most, this may sound absurd, or even impossible, but for Crotts, improv has become second nature.

For nearly five years, Crotts has worked seriously on piano improvs, mainly sharing them through Facebook livestreams that go on continuously for up to 40 minutes.

“I’ve been improvising as long as I’ve been playing piano. When I first started I was just messing around on the piano in my grandparents house,” Crotts said.

In order to play spontaneously, Crotts begins with a unique chord progression called “ii7 Vb7 I7 Ib7.” This, Crotts notes, provides the perfect jumping off point to an infinite number of unique melodies.

“It’s a theme I have that I can build on later and use that same chord progression to develop into more interesting things later on,” Crotts said. “So what I usually do is I’ll start the improv with this one little phrase that I reuse all the time, and then that will get me into the spirit of it.”

Despite having taken piano lessons, Crotts is largely self-taught when it comes to improvs. That has allowed him to further develop his own style without much outside influence.

“I’m kind of in an echo chamber. I don’t have a lot of big stylistic influences on me because I don’t really take piano lessons anymore and I haven’t for a really long time. I don’t play piano with other people very frequently,” Crotts said. “It’s mostly me just influencing myself.”

While improvs are mainly a solitary pursuit for Crotts, he still incorporates new techniques that he comes across. In particular, he uses many elements from his role model, jazz legend Charles Mingus.

“I definitely feel like I stole a lot of stylistic tricks from him,” Crotts said. “[Improv] is sort of an intuitive thing. But definitely, I do try to practice new techniques. If there’s a new way of playing chords, I’ll practice that a little bit and I’ll try to work it into an improv I do. If maybe I want to improvise in a different key, I’ll practice my improv in a different key.”

Crotts has considered a professional career in piano improvs, but for now, he views it as just a hobby.

“Sometimes I imagine it as a semi-professional career. I’d certainly love to have a band and give concerts, that’s always been a dream of mine. But I definitely don’t think that’s what I want to do for the rest of my life,” Crotts said.

Although improvising may not play a major role in his life in the future, Crotts stresses that it will always have an impact on him because of the way it deepened his understanding of music.

“It gives me a better intuitive sense of music. I think by doing this for so long, and just playing music all the time taught me how to come up with melodies and harmonies, it taught me a lot about music theory that I didn’t necessarily need to read up or study,” Crotts said. “It made me musically aware on a more unconscious level. I don’t have to think about things as much.”