Martin Scorsese scores with “The Irishman” 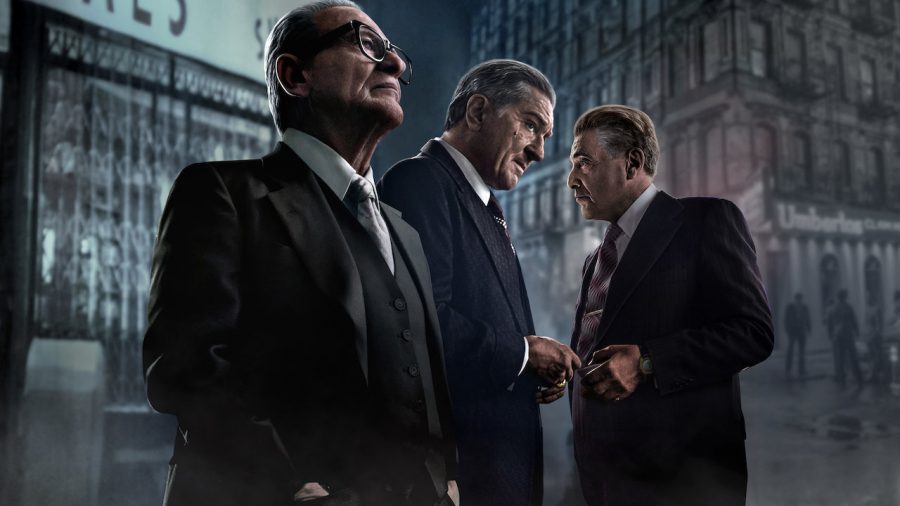 "The Irishman" tells a story of a former veteran turned hitman

An unseen plot and high-quality acting make “The Irishman” a good movie to watch on a Saturday afternoon.

“The Irishman”  received numerous awards; it received 10 nominations at the 92nd Academy Awards, including Best Picture, Best Director, Best Supporting Actor for Pacino and Pesci, and Best Adapted Screenplay. At the 77th Golden Globe Awards, the film was nominated for five awards, one of them being Best Motion Picture for Drama. “The Irishman” also earned 10 nominations at 73rd British Academy Film Awards, including Best Film.

The Irishman is based on a true story that comes from the book “I Heard You Paint Houses: The Biggest Hit in Mob History” by Charles Brandt. The main character, Sheeran (played by Robert De Nero), is a World War II veteran turned hitman for a mafia group. Sheeran during this movie reflects on his past and the path he chose to become a professional hitman. He gives details into his inside life and the inner workings of the mafia. He becomes involved in a famous crime family with the leader being Russel Bufalino, played by Joe Pesci. Looking back, he blames himself for the murder of his close friend and labor leader Jimmy Hoffa (played by Al Pacino).

One of the most notable features of the movie is the editing and the special effects used for the characters’ faces. With the flashbacks and retelling of past stories, “The Irishman” uses de-aging software to make the faces look younger, exactly 30 years, to take place thirty years ago. For the present time, “The Irishman” uses the actors’ regular faces.

The de-aging effects used in the movie are adequate for the movie; however, they can still be improved on, especially when the timeline goes way back as it does in the movie. But compared to other movies that use this method, such as Aquaman or Captain Marvel, this is one of the best uses of the de-aging effect.

The plot is an exciting one that covers from World War II to the present day. “The Irishman” is a compelling story of blood and mafia. One of the best things about the plot is that the present day scenes are backed up with a story of the past, and the actions that led up to that moment. One thing that “The Irishman” lacks is the brevity of most movies. This movie is three and a half hours long, and it takes long to understand the plot. But once a viewer gets through the first part, the story behind “The Irishman” becomes understandable.

This movie is definitely worth the watch, providing an interesting insight into the mobster’s life. With the detailed plot and the futuristic editing and actors, “The Irishman” shouldn’t be missed.