The Year We Conquered Death 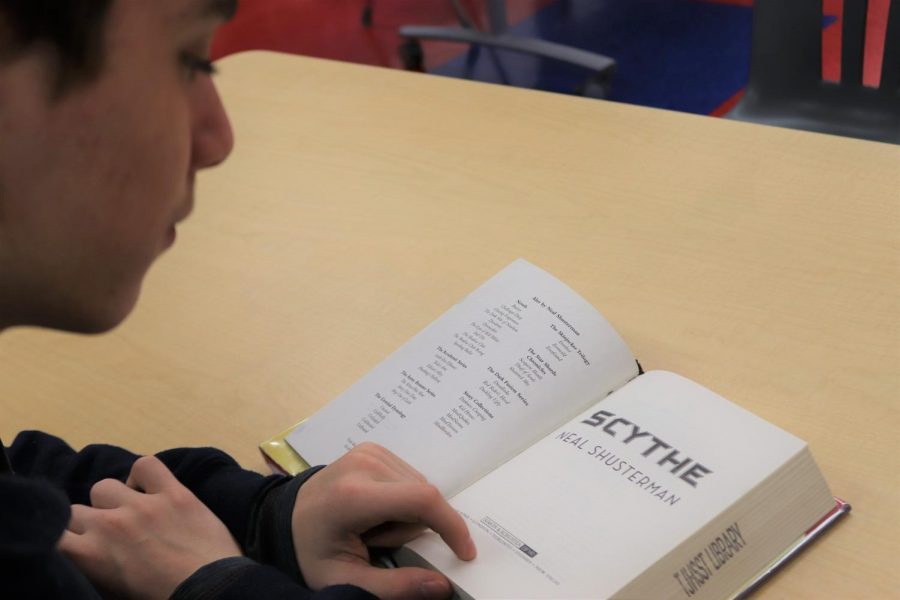 Freshman Gabriel Ascoli reads Scythe by Neal Shusterman. The book has won several awards, including the Printz Honor award and an ALA/YALSA Best Fiction for Young Adults top 10. Scythe is the first in the Arc of a Scythe trilogy.

Impossible circumstances, corrupt leaders, cheesy romances, and a utopia gone horribly wrong – all are part of the quintessential dystopian novel. These elements stereotypically describe Dystopia, a widely used genre, which has caused these plot elements to become overused. Most dystopian novels manage to capture the reader’s attention through a quick-paced plot, or through interesting characters – however, Scythe by Neal Shusterman takes an entirely different approach.

Scythe is a dystopian novel set in the distant future, after death has been conquered and the world’s population is managed by Scythes, the people who have the license and the mandate to kill people permanently. The plot centers along two teens, Citra and Rowan, apprenticed to Scythe Faraday, competing to be crowned a Scythe by the end of the year or be killed, or “gleaned.”

While the plot has unexpected twists and the main characters well – developed and captivating, the most interesting part of the book is how it brings discussion of ethics and philosophy, especially in a world without death. The very premise that the characters kill to maintain population brings up the debate of what would truly be an ethical decision.

For me personally, I had to get used to the jarring difference in what was considered to be ethical to form more opinions about the characters themselves. It was almost like a mild case of culture shock. Since I wanted to know what happened next, I was forced to overcome it and contend with the fact that the Scythes were not necessarily all psychotic killers. The difference in ethics made the book a jarring read at first, but ultimately allowed me to appreciate the characters and the plot more, even if I did not agree with some of the choices that were made.

Overall it was a pretty decent book. It made me think more about the ethics behind managing population and even the limit to personal privacy. It also helped me realize more about how ethics is largely dependent on the culture and situation of the time, and not necessarily by a set list of rules. I would highly recommend it to readers ready to give dystopian novels another try, even if they are not very philosophical themselves. Ignoring the ethics, it really is a captivating, unpredictable novel.