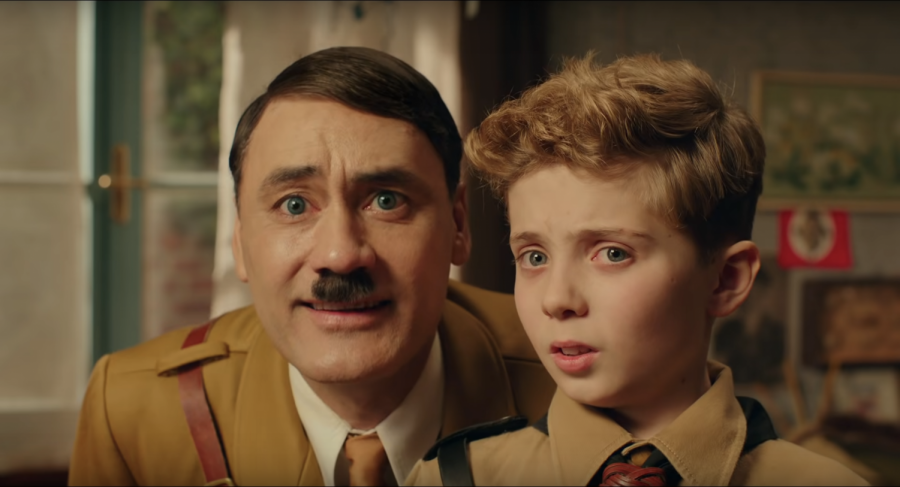 Imaginary Hitler (Taika Watiti) advises child Jojo Betzler (Roman Griffin Davis) before he attends Hitler Youth training camp. This scene serves as a setup to what happens in later stages of the movie.

This shout is followed by the cheers of hundreds of ten-year-olds as they cast hundreds of books into a growing fire.

This is just one of the action-packed scenes from six-time Oscar nominee and one time winner movie “Jojo Rabbit”. The movie is the story of indoctrinated and fanatic ten-year-old Hitler-youth member Johannes “Jojo” Betzler, who grapples with the revelation that a Jewish girl has been hiding in his house with the aid of his mother (Scarlett Johannson). The film also sees visits from Jojo’s imaginary friend, a caricature of Adolf Hitler, played by the director of the film himself Taika Watiti, who is also known for directing “Thor: Ragnarok”.

The movie is primarily a comedy, however, one thing I particularly liked about the film is how they interwove the comedy into what was a quite serious and dramatic plot. The movie has hilarious one-liners and comedic build-up but also has an emotional plot that portrays the struggles of those living under the Third Reich. The character development is also phenomenal, however, I won’t go into this for the sake of avoiding spoilers.

Overall, the movie is great and I would recommend it if you’re looking for a comedy that also gives you something to think about at the end.