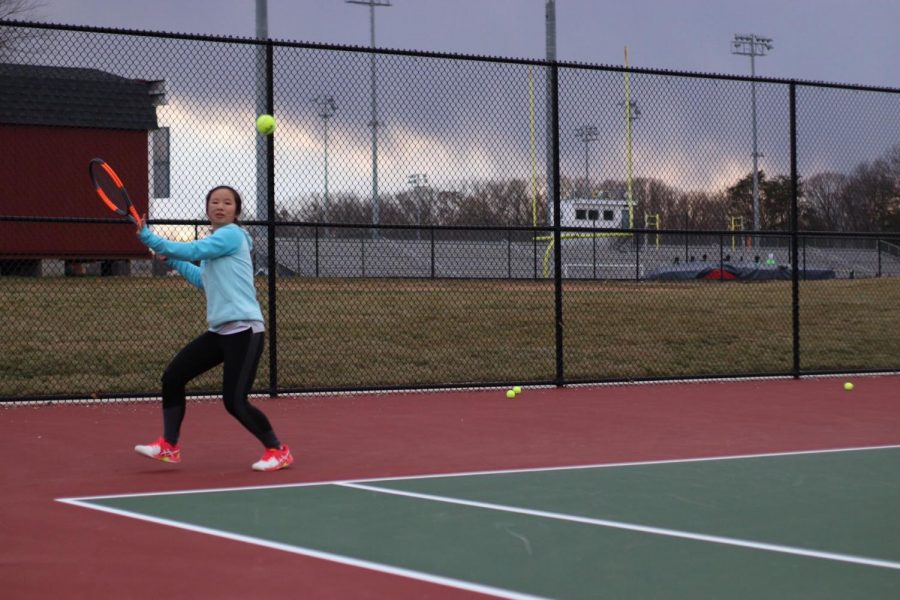 Sophomore Yeefay Li prepares to return a ball. “Tryouts were difficult because the weather was so unpredictable - for example, it was raining and snowing on Friday, so court conditions were really bad,” Li said.

Jefferson Girls Varsity Tennis team hosted tryouts all throughout the week of Feb. 24, starting on Monday, Feb. 24 and going until Friday, Feb. 28. Over 20 prospective team members attended these tryouts in hopes of qualifying for the team. Tryouts were reviewed holistically as opposed to looking at a win/loss ratio – brackets were formed for all those trying out with three returning members and three new members in each bracket.

Sophomore and returning team member Sheryn Livingstone was excited to return to tennis because she was able to play with some of her best friends and teammates.

“I’ve made some of my best friends on the tennis team and being with them and playing with them is so much fun,” Livingstone said. “It’s also such a good way to destress because you can just whack the ball and let out all of your frustration.”

Livingstone, who also plays with a private tennis club outside of school, was pleased to see that her skills had improved since last season.

“Even though it’s been a while since I’ve played with [Jefferson] Tennis, coming back feels great because I’m doing what I love with who I love,” Livingstone said. “I could tell that I’ve definitely improved during the scrimmages despite the long break from it [tennis].”

Sophomore Yeefay Li was surprised by the level of competition presented by prospective players.

“Normally, when I go into tryouts, I don’t have any expectations. But even though the amount of people trying out this year decreased, I was surprised to see the increase of skill of some people, especially returning members,” Li said.

“I want all of us to keep challenging each other and pushing ourselves to improve, and, hopefully, we’ll be able to make states again this year,” Livingstone said.