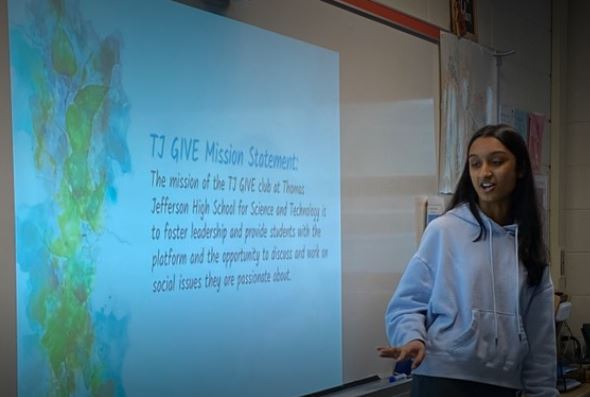 TJ Give, a new service club founded by sophomore Hasita Nalluri, hosted its first meeting during Wednesday A block on Feb. 26. During the meeting, Nalluri explained the purpose of the club and attendees brainstormed volunteering projects they wanted to pursue.

Nalluri was inspired to create TJ Give when she was president of her middle school’s LEO club, which stands for leadership, experience, and opportunity.

“[In LEO], students got to discuss current social issues. From there, we broke into groups, and there were leaders for each service project based on what we were passionate about,” Nalluri said.

Similarly, TJ Give will choose social issues to focus on based on the input of its club members.

Other service clubs at Jefferson are usually affiliated with one particular organization, and Nalluri believes that TJ Give offers the opportunity for students to work specifically on what they’re passionate about.

“For a lot of students at TJ it’s like you either have a club or you don’t. So TJ Give is kind of a platform for students to be able to work on social causes that they’re passionate about if they don’t have clubs for it,” Nalluri said.

The club had a large turnout, sign-ups reaching their maximum of 30.

“I was really happy that there’s a lot of people who were interested in the club. We got a lot of ideas that we probably wouldn’t have thought of all [on] our own,” Nalluri said.

Because the club is just starting, she is currently focused on recruiting more people into the club.

“Next meeting, which is two weeks from now, we’re going to probably start focusing on how we want to do service projects that focus on those kinds of social causes, and then actually start implementing those ideas,” Nalluri said.

Those who attended this club meeting appreciated its discussion based format.

“I feel like all the other voluntary organizations here, since they’ve already been established for so long, there’s not as much of an opportunity to join,” sophomore Akanksh Sahu said. “Whereas this year, it’s a brand new club. It’s a lot easier, like you actually have an opinion, you have a voice here.”