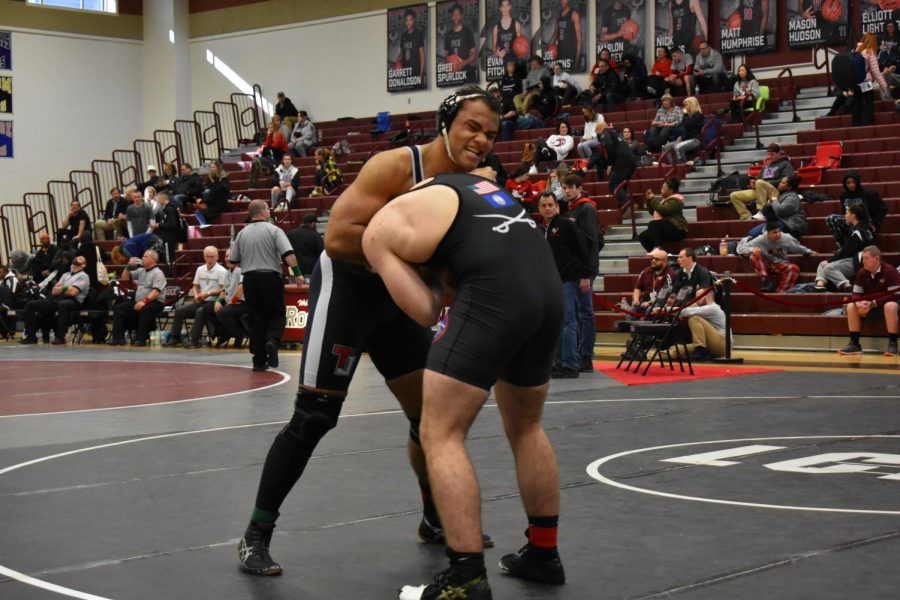 Grabbing his opponent in a headlock, senior Caleb O'Cain competes at wrestling states.

At states, each weight class consisted of 16 people, with the top six getting ranked and making it onto the podium. Of Jefferson’s wrestlers, O’Cain was the only one who placed, winning third in the 285 pound weight class.

“I wanted to win it but I am happy with third and all the work I’ve put in to get there and all the support from the team to get me there,”O’Cain said.

For all the underclassmen competing, it was their first time reaching states, and presented a different wrestling experience where they wrestled qualifiers from every region in the state.

“The difference is the tension and the stakes because some people at states are seniors and this would be their last tournament,” Barokah said. “Way more people cried or were angry after they lost than usual. Also since everyone there had to place fourth or higher in regionals to go to states, everyone there was really good.”

Though the competition proved to be difficult, wrestlers found ways to keep themselves motivated during matches.

“During my last match, I knew I was losing, but I was determined to not get pinned. I fought my hardest and kept repeating in my head, ‘I won’t get pinned,’” Ta said.

For the next season, underclassmen wrestlers aim to improve upon their achievements from this year.

“My goals for next year are to win districts, win regionals and place at states, “ Barokah said.

However, Jefferson’s wrestlers are still appreciative of their accomplishments from this past season.

“Qualifying for states has been my dream for so many years, and to finally achieve it has been incredible. Accomplishing this goal shows that you can do anything you put your mind to and motivates me even more,” Ta said. “It’s been amazing and I’m elated that I was able to get here. I haven’t been able to stop smiling.”