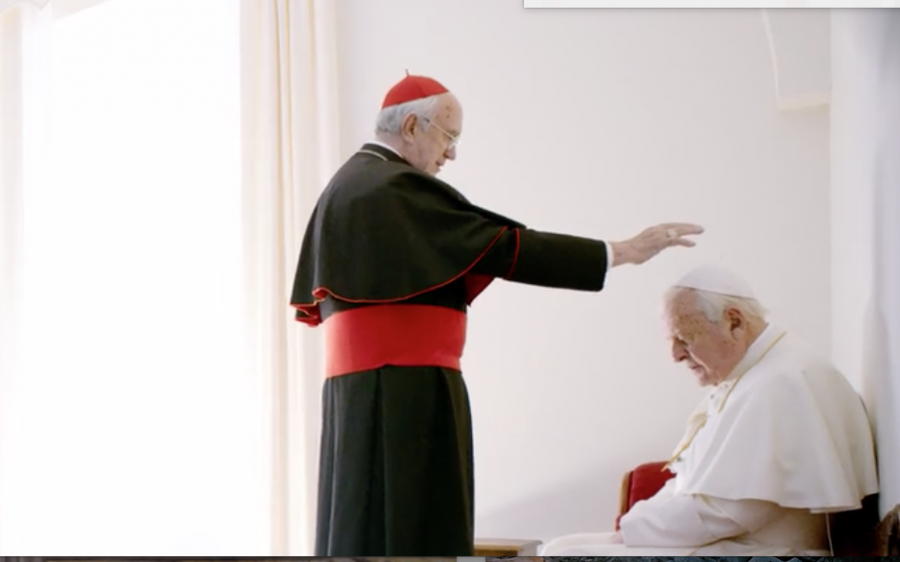 Cardinale Bergoglio (Jonathan Pryce) stands before a kneeling Pope Benedict (Anthony Hopkins) after the Pope Benedict offered him his title of "Pope". The scene took place in a smaller replica of the Sistine Chapel created for the movie.

Filled with moral dilemmas, different beliefs, and conflict between human and divine, “The Two Popes” follows what happens behind the scenes in the Catholic church, which influences over 1.2 billion followers. This movie is nominated for Best Actor in a Leading Role for Jonathan Pryce, Best Actor in a Supporting Role for Anthony Hopkins, and Best Adapted Screenplay. Set after the death of Pope John Paul II, this movie follows the selection of a new pope; the two front-runners for the title Pope Benedict XVI (Jonathan Pryce) and Pope Francis (Anthony Hopkins) form a special bond. The whole movie is filmed as if it were one conversation between the past-rivals. They have many different views on how catholicism should be practiced and the regulation of old catholic laws; Pope Francis comes to confront Pope Benedict about his seemingly rebellious behavior due to these opposing viewpoints.

The artistic choice of having momentary flashbacks during the discussion allows us to feel the emotions of the characters. Although we do not learn much about Pope Benedict XVI, we are flooded with the background and development of Pope Francis. The language changes throughout the movie based on the situation the character is in and what area the scene is set in, and contributes to showing how international and widespread catholicism is. This film is special as it can appeal to audiences that are not even Catholic, providing an engaging experience.