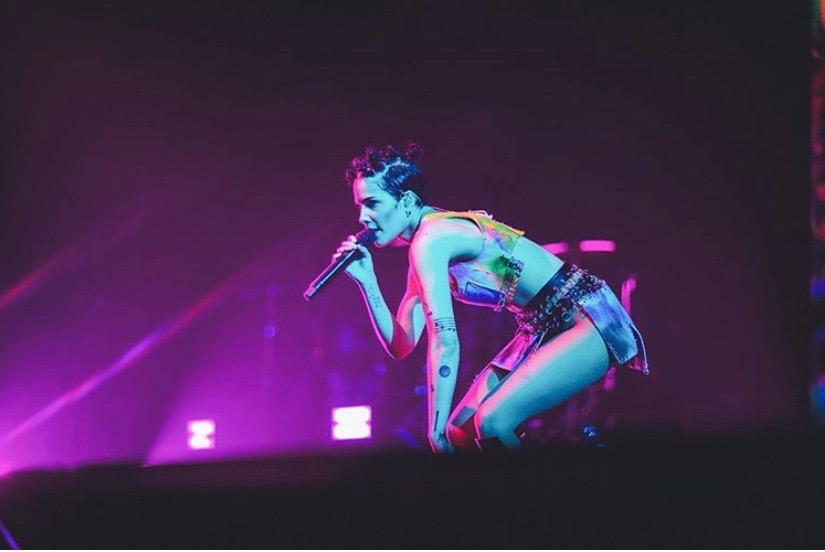 Halsey, currently on tour for her new album "Manic", performs for Amsterdam before a riveting crowd.

At the surface you see a singer: Halsey.

Reach the roots, you uncover a soul: labeless.

In an exclusive for Spotify regarding her new album, Halsey reflects on how “Manic” ties in with the “Three Face Theory”. Everyone has three faces: the first you show to the world, the second you show to your friends and family, and the third is the one that no one else sees. These tracks run deep into the second and third face. Released on Jan. 17, Manic is an unfiltered narrative of the past 25 years of Ashley’s, rather than Halsey’s, life. The “H3” and “A01” etched onto the album cover signify that while it is Halsey’s third album, it is Ashley’s first album. Through “Manic” Halsey expresses her emotions as someone who is bipolar, highlighting her own experience with mania over the media’s recognition of it as self-destructive and crazy.

“What am I really like when I’m manic? The answer is I am loving, I am passionate… I can be impulsive, but mostly I am going through every second of my day being entirely led by emotion rather than logic… these are all the best parts of me,” Halsey said in an interview with Apple Music.

Halsey’s first single for the album, “Without Me”, quickly became her first number one-single, reaching number one on the Billboard Hot 100.

“It’s about my life, my relationship that the world has watched so closely and vehemently in the past year and a half,” Halsey said in an interview with Beats.

What I like about the song is that it left an impact greater than a simple break-up song, with a deeper meaning surrounding not only her ex but also her friends and family. It shaped her relationships with these people as they realized the characteristics they shared with the detrimental relationships she wrote about in her song.

Following “Without Me” my second favorite of her album includes “Graveyard”.  Bringing us into the song with the strum of a guitar, Halsey takes us into a toxic relationship where she accompanies someone along the dark path they choose to take, hurting herself without realizing it.

In this lyric she expresses a piece of advice that her mom once gave her: never fall for the one who gives you butterflies, you should never feel anxious or scared when you are with someone you love. This idea is reiterated in the music video for “Graveyard”, in which Halsey follows her lover into a theme park with an aquarium, then leaves the park through this aquarium only to find that her lover is no longer there and that the park is no longer colored. This same aquarium is presented in the “clementine” music video, where Halsey dances with her brother Sevian. In a tweet a fan speculates how the two are related: in “Graveyard”, Ashley “dies” in the aquarium, and Halsey is born, and in “clementine” Sevian stars as her guardian angel reminding her that she is Ashley.

Halsey especially opens herself up in “929”, everything poured on to a paper of lyrics, the words lifted up by her voice: her chaotic childhood when her family would move around a lot to find a job and a cheap house, her remembrance of most of the fans she has met (a skill she developed from her father), the reality of meeting the people she once looked up to, and her once-shaky relationship with her dad.

“My little brother cried, he said this is the most I’ve ever sounded like his sister,” Halsey said in an Apple Music Interview.

Her raspy voice blends well with the softness of the tone. As a fan I learned a lot about her from this song and feel more connected to her music as I begin to understand the deeper meaning it conceals.

Halsey experiments with her sound throughout “Manic”, a pop-dominated album intertwined with a few pop-rock and country inspired songs. Although I was skeptical at first, she fit well into the country genre, breaking the boundaries of being a pop artist with both “Finally//beautiful stranger” and “You should be sad”. In “Finally//beautiful stranger”, the rustic melody flows out and her emotion bleeds through. Similar to a classic country song, she leads us through a story sending a message along the way. “You should be sad” on the other hand is a faster-paced song that aches with self-confidence and catchy lyrics, giving us the country song we never knew we needed.

Although most of her songs on the album center around her relationship with ex-lovers, friends, and family, “More” is brought out in a different light; it underscores her struggles with endometriosis and five miscarriages. The song strengthened my appreciation for her as a writer, with her courage to take something very sensitive and personal and put it into words.

While I found some of Halsey’s new songs such as “Alani’s Interlude” and “Still Learning” to be one of her weaker ones in terms of both sound and lyrics, I love the rest of the album and how she was able to lead us through her journey of the 25 years she has lived; shown in all honesty and scars, her ability to diversify into different genres yet still retain her classic poetic lyricism and iconic Halsey sound makes her an inspiration, urging us to bring our third face into the world.