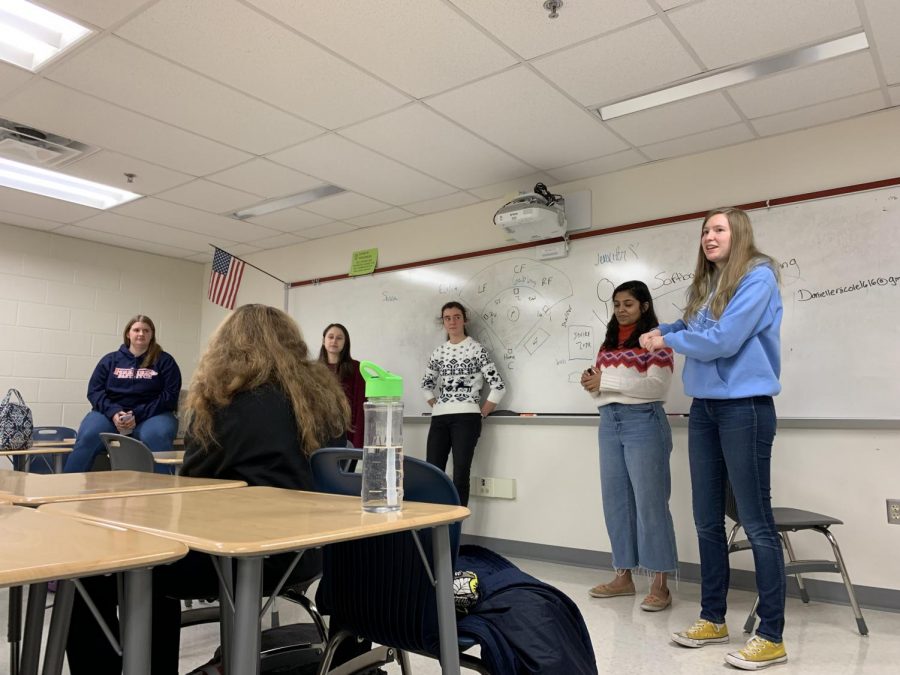 Returning team members explain the basics of the game and details about the team to the interested players. “Everyone on the team is great and just having that time to relax after school. Even though I may not be the best at it it’s nice to see the improvement that I have had and that the team has had.” Heller said.

Jefferson’s softball team held their interest meeting for the spring season on Wednesday, Feb. 19 during B block, attracting a crowd of both new and experienced players; mostly freshmen.

“I think you definitely should [join] because it’s an amazing experience and it’s so much fun.” Senior and JV Captain Gabby Heller said, “If you’re worried about the time [commitment], it’s helped me with time management so much more. Even though I would get home later, I would still finish my work at the same time.”

Although some players join the team with prior knowledge in softball, most players who try-out are brand new to the sport and are looking to explore their interests through a spring sport.

“I started playing my freshman year because it seemed really fun and interesting and I thought, ‘Why not try something new?’ and I’m really glad that I did because I’ve gotten so close over there and I’ve learned so much,” Heller said. Heller joined the team during her freshman year and has played for all four years since.

Jefferson’s softball team, which ended with a team record of 3-13-0 by the end of last year’s spring season (2018-19 school year) is looking for any interested players regardless of prior experience in the sport.

“Softball is just so much fun.” Heller said, “If you play softball, that’s great and you’ll do pretty well, but if you’ve never played before it’s definitely a great sport to join because everyone is really supportive and it’s basically a family.”