Minecraft 1.16, news from a hellish place 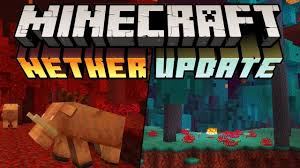 The Minecraft 1.16 crimson forest and warped forest nether biomes (shown above) are the newest additions to Minecraft, along with the flora and fauna that inhabit those areas.

The Minecraft 1.16 update includes a rework of the nether, the hellish dimension. Along with many new blocks and some minor changes to other mobs, like enderman.

The nether, a dimension that has not been updated for a long time, is finally being updated. Along with three new exiting biomes, which are the soul sand valley, warped forest, and crimson forest, there were new mobs added, the hoglin and piglin.

The soul sand valley is a biome where soul sand coats the landscape. There is also a variant of it called soul soil. When it is set on fire, it turns blue. A lot of Ghasts and Skeletons spawn there, and there are structures like fossils that dot the landscape made of bone blocks. Netherite soil can be used to make blue torches and lanterns. They give off less light but are an alternative to the regular lighting sources.

The old nether is now called the nether wastes, but it is much rarer. There are also unique tints and particle effects to each biome in the nether. The tints are only visible when the light levels are high in that area.

An update to the nether brings new nether mobs. The two new additions to the nether’s limited fauna are the piglin and the hoglin. The hoglin is a mob that looks like the overworld pig except with a bigger nose and a tusk. It drops pork chops and leather, making it one of the only food sources in the nether. It is aggressive to players, doing three to four and a half hearts of damage every hit. The piglin is a humanoid mob that spawns in the crimson forest with various pieces of gold armor, and a gold sword or crossbow. It is aggressive towards the player if the player is not wearing any golden armor. The player can also barter with the piglin by throwing them gold items. They will give the player rotten flesh, fungi types, flint, ender pearls, leather, pork chops, obsidian, soul soil, gravel, shroomlight, magma cream, glowstone, nether quartz, or warped nillium. All of these items have a varying probability of being given to the player.

There is also a new material introduced that is better than diamonds. Netherite is a material that can be added to diamond tools to enhance them. Netherite can also be used to construct a beacon and be used as beacon fuel.