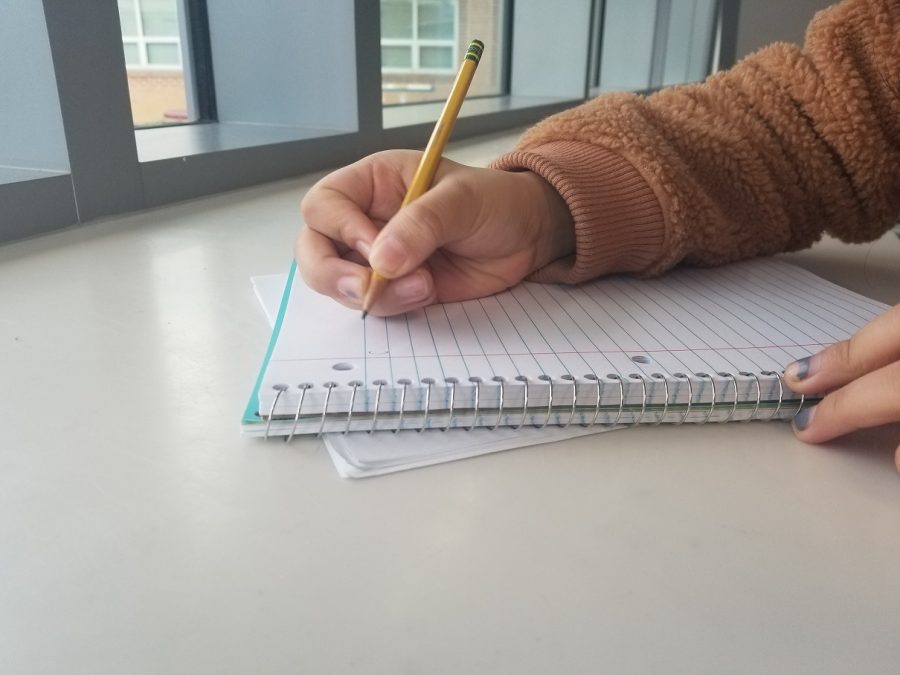 The National Chemistry Olympiad has several rounds of exams and tests students on a number of different chemistry topics. “The first part [of the test] is pen and paper, and then I think [for] the two [students] that get selected to go on to the nationals, there’s a lab component of that,” chemistry teacher Mr. Adam Smolinsky said. “I think most students take it just because they’re interested in chemistry, and here at TJ students are also really interested in competition, so I think that they like to show off how much they know.”

The room is silent, save for the soft sound of pencils scratching on paper. Students sit at their desks, separated by dividers, focusing intensely on the exam paper before them. The Jefferson Chemistry Olympiad qualifying exam has begun, and there is no time to waste. For those passionate about chemistry, this test presents an opportunity to participate in a prestigious chemistry competition that extends to the international level.

The U.S. National Chemistry Olympiad (USNCO) is a nationwide exam for high school students sponsored by the American Chemical Society and aims to stimulate young people to achieve excellence in chemistry.

“It’s a competition where students are selected for their knowledge of chemistry, and then the top students in the country go to a summer camp and do intensive study of chemistry, including lab skills and some other things like that. And then they pick [people] from that group to go [to] an international chemistry olympiad, and they go and compete against students from all over the world,” Jefferson chemistry teacher Adam Smolinsky said.

To advance on to the national level exam, students first must go through several grueling qualifying tests.

“This year we had 45 students take an initial qualifying exam, and then we’ll take another exam at the end of February. We’ll get down to 20 students from TJ, who will take a local exam. And then the top two from that exam will go on to the national,” Smolinsky said.

The USNCO selects the top 20 scoring students from across the US, the top four of which will represent the country in the International Chemistry Olympiad. Although the prospect of ranking nationally and going on to compete on the international stage is exciting, for many people the competition is about more than winning.

“I was interested in chemistry [from] a young age,” sophomore Edward Lee, who is taking the exam this year, said. “I like AP Chemistry a lot, I think once you learn chemistry, your perception of the world changes a little bit, because everything is in terms of interactions between molecules and a lot of things change, and it’s just really fun to be able to find the stuff you learned in the real world.”

For students like junior Erin Li, the USNCO is a chance to apply their knowledge and challenge themselves in a different way than regular school chemistry classes.

“The Chemistry Olympiad test is a lot different from regular chem tests at TJ. It’s more problem solving based, so you generally have to apply your knowledge to figure things out, so I guess it’s a fun way to find out how much I really know,” Li said. “I guess chemistry is fun for me because it’s not completely memorization since you have to actually solve stuff. I think Mr. Kauffman was the one who really got me interested because he would sometimes go off on tangents about some chemistry things and it would be really interesting.”

Studying for the National Chemistry Olympiad on top of keeping up with classes at Jefferson means work, work, and more work. Balancing regular school activities with prepping for the USNCO can be tricky, but students manage to pull through.

“I definitely have to stay up late very frequently, but since I like chemistry so much I honestly don’t mind studying for that long. I overall enjoy doing chemistry so preparing for the test isn’t that much of a hassle to me,” Lee said.

Regardless of how far they get into the competition or how high they rank, the USNCO still provides a unique learning opportunity for students of all stripes.

“I think that any practice for those kinds of activities, for that kind of exam, is good,” Smolinsky said. “I think that it helps them review and be prepared for the sort of further chemistry that they might take, like organic [chemistry], or going into the chemistry lab.”