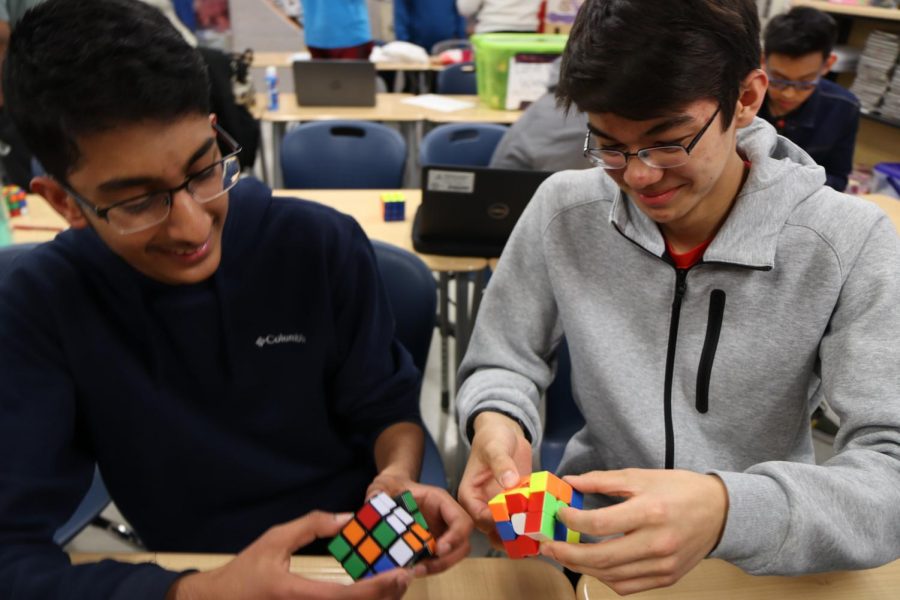 Freshman Harsha Ravella and sophomore Michael Fantemi cube together at Rubik's Cube club. Fantemi began his cubing career during third grade after watching his friend solve a cube. "One of my friends showed me and I thought the things is so fast, so I wanted to do that," Fantemi said.

So what sets TJ apart from other high school teams? Although we are a STEM school, that doesn’t necessarily have much to do with Rubik’s cubes. Junior and President of the TJ Cubing club Justin Choi says it’s due to the high level of teamwork within the club.

“There’s a lot of factors but I think the main one is: we have to work as a team to get things done. So, when we go to competitions we usually go together, and especially for one of the main events which is solving 25 cubes with eight people. You have to be able to coordinate who’s going to solve what cube and if you have half of a cube left, for example, who’s going to get that cube. So I think it’s important that you work together.” Choi said.

Others, such as sophomore Michael Fatemi, accredit the team’s success to the close cubing community because they meet so frequently. The Rubik’s cube team meets during most B blocks on Wednesday and Friday, which has a consistent turnout of members who regularly participate in the club.

“We practice a lot and there’s a really nice community around here and everyone has to work together which means that we get to know each other really well. Which is really fun because we just hang out while solving cubes

and practicing for the big competitions which are usually in April.” Fatemi said.

From those who have never attempted to solve a cube to competitive cubers, the club is open to anyone who is interested. However, many of the members of TJ Cubing were already interested in Rubik’s cubes long before they even entered high school.

“I started cubing when I was in fourth grade and I started because I saw my dad cubing and thought he was really fast at the time, even though it took him a minute to solve the cube, and from there I really wanted to beat him. So I went out and looked up a guide on how to solve a cube: and that’s where everything started. I knew about the club before I came to TJ because I saw them at a competition in Las Vegas when I was little. This was actually the World Championships in 2013, so when I moved back to Virginia from California I saw them at a competition hosted at TJ and knew about Ms. Conklin before I came to TJ.” Choi said.

Attracting members since its founding, Jefferson’s Cubing team is an astonishingly renowned high school team and one of the top in the country. TJ Cubing has placed within the top ten multiple times at several World Championships and holds the current world record for the fastest time for the 25 cube team event.

“We’ve been breaking the record for the last three years. I was only doing this for the last two years,” Choi said. “So I didn’t know that the team before them, but since I’ve entered Jefferson I’ve been lucky enough to be a part of this team.”