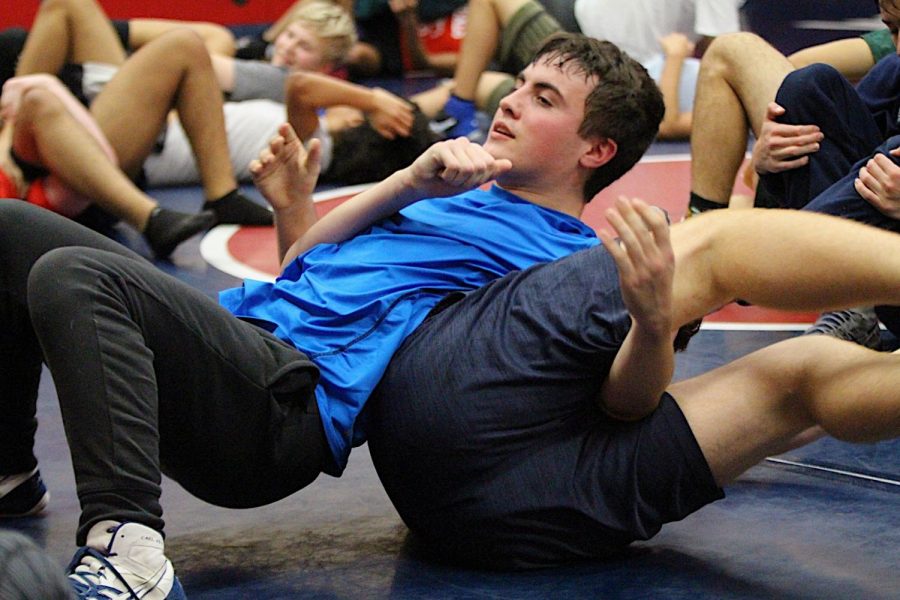 Pinning his opponent to the ground, sophomore Max Vetter learns a new technique during practice

At wrestling districts on Saturday, Feb. 8, Jefferson’s varsity team placed fifth out of seven schools, with all 14 wrestlers advancing to regionals. Of those 14 wrestlers, seven wrestlers won medals in their respective weight classes.

The tournament was set up so that each weight class had a bracket of seven wrestlers, one from each school, who wrestled off to move forward in the bracket towards the championship match. If a wrestler lost their match, they wrestled others who lost for third place.

“Overall, we did better than last year and we had more people place [in the] top four, with six last year and seven this year. Additionally, all 14 wrestlers are moving on to regionals while last year I think we only had 11. We placed fifth among the teams even though we were only 6.5 points behind Wakefield and were so close to getting fourth,” Ta said.

At districts, Jefferson’s team had to make up for some varsity wrestlers not being able to participate due to injury, and consequently, many new wrestlers had to wrestle instead.

“Two of our varsity members had gotten concussed and were unable to wrestle for the rest of the season so we had to bump JV members up to varsity. Last year we lost a lot of seniors and had to make significant changes to our varsity lineup so a lot of our varsity team this year haven’t wrestled varsity before,” Ta said.

For wrestlers who had previously participated at districts, Saturday’s tournament allowed for them to reflect on their improvements since they last competed.

“I’ve gotten stronger and bigger since last year, and that’s made a huge difference, because it’s easier to control your opponent when you’re stronger,” Golden said.

The next step of the Virginia High School League (VHSL) circuit, regionals, takes place on Feb. 15 at Freedom High School, where the team has a chance to advance to the state championships.

“At regionals, I look forward to getting challenged by really strong wrestlers and I hope to demonstrate all the work and training I’ve been doing for the sport,” Golden said.