Discovering the art of dance 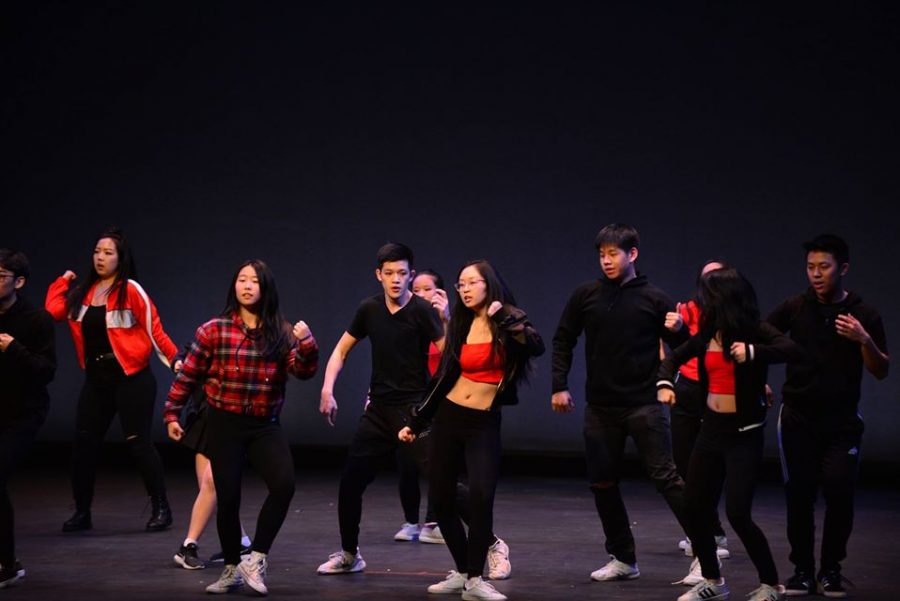 Julia Chen dances in the front row of the 2019 KCC iNite performance.

Her debut as a dancer began at freshman MEX. Now senior Julia Chen is the coordinator of KCC iNite.

One of Jefferson’s many unique points is its dance culture.

“Many dancers at TJ started out with zero dance experience before high school. If I went to my base school, I wouldn’t have participated in any of the dance activities,” Chen said.

She believes that the many different styles and levels of dance offered at Jefferson allow students from all dance backgrounds to join.

“Beginners can participate in some of the easier dances, while more advanced or more experienced dancers can try out for the harder dances,” Chen said.

Because of Jefferson’s dance culture, she didn’t need that much of a push to decide to participate in MEX and KCC iNite. These same dance events involve a lot of student commitment and leadership.

“I’ve gotten to know many people from dancing and performing with them. I also really like how these activities are all mostly led by students,” Chen said.

Chen’s dance experience at Jefferson has also helped her overcome her stage fright.

“During freshman year… I would be scared to go out on stage and perform in front of so many people. But now after doing it for so long, I actually love performing in front of other people,” Chen said.

She attributes this newfound confidence on stage to a change in mindset.

“Throughout the years, I started to worry less about messing up and thought about how I should just have fun performing with my friends on stage,” Chen said. “Of course, I still get a little nervous before getting on stage, but [now] I just focus more on the fun part of performing rather than overthinking every little mistake I might’ve made.”

Senior Jae Canetti started dancing in iNite his sophomore year. When he was cut from several dances his junior year, Canetti took the rejection and turned it into motivation to improve.

“It was the stress relief factor. It was a bad time during junior year, I had a really bad schedule where all my hard classes were back to back to back, and I was just really struggling,” Canetti said.

When he dropped AP Physics and filled his lunch periods with urban, Canetti began to realize that dance could calm and clear his mind.

“When you’re practicing the dance, your full attention has to be on whatever you’re doing – whatever move you’re trying to execute. And it’s kind of it makes you forget everything else, just in a pure sense. Because if you if you start thinking about other things, that’ll mess you up,” Canetti said.

This moment of realization inspired him.

“I found myself subconsciously running the choreography in my mind. I was like, if I like it this much, I should try to get better and see if I can get back in,” Canetti said. “The rest is history.”

That’s when Canetti started attending dance workshops at GMU called Spam Musubi, where graduates and crew members will teach choreography for free. The classes started off as a rough experience for him.

“The first workshop I ever went to was a four class workshop called an intensive, which is double the length of the normal. By the end of it, I was in cardiac arrest. So that was rough,” Canetti said.

Despite the challenge, Canetti continued attending the workshop and believes that Spam Musubi has helped elevate his dancing skills and his ability to choreograph pieces.

“For the first four, five times, I just did not get the piece. But since I’ve been going more recently, I’ve been starting to get it better and get the pieces more in control,” Canetti said.

He remains humble about the small victories he’s had in his dancing career.

“I’m not gonna say I’m anywhere close to the best at it – I’m still in the bottom half, but I’m making it through a little better and its a good way to track my progress with these monthly installments of Spam [Musabi],” Canetti said.

Because of these workshops, Canetti can attest to just how popular dance is at TJ.

“I have friends at other schools that do it. They’re always talking about how they’re the only two guys in the whole school that are interested in dancing. And here we have hundreds,” Canetti said.

Although Canetti didn’t do MEX until his senior year, watching other people dance motivated him to join them.

“Our homecoming spirit is so intense, you just want to be a part of it, even if it means getting out of your comfort zone and doing something that you never thought you would do.” Canetti said. “You just want to do it with your friends… And before you know it, you enjoy dancing. It becomes more than just doing it.”