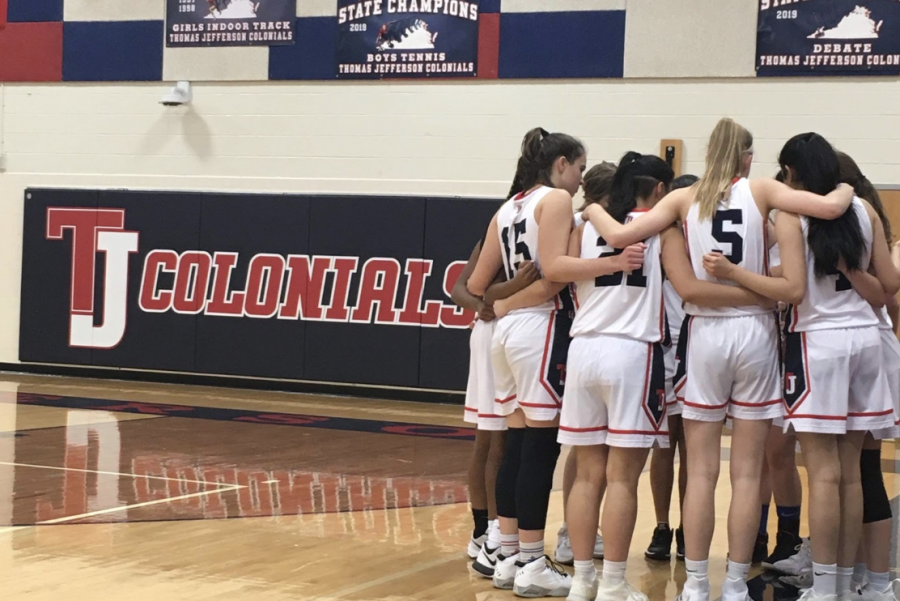 The Jefferson varsity girls basketball team huddled together after a time-out.

The Jefferson varsity girls basketball team won their first game of the season against Trinity School at Meadow View on Thursday, Jan. 30. Jefferson was victorious with a score of 52 – 44.

This year, a possible factor of the team’s disappointing results may have been that more than half of the team is new to playing at the varsity level.

“In the beginning, we were still working on how to play together and how to play at this [varsity] level,” sophomore forward Damilola Awofisayo said. “It was kind of rough; we lost a lot of games, but we were learning from every game. I think it’s been an upward trend since then.”

Throughout the season, most of the team’s losses resulted after the opposing team had surpassed Jefferson when they had a lead.

“This was our first win [of the season], and it was one of the first times that we haven’t blown away,” Awofisayo said. “This was the first time that our morale was constant and even when [the opposing team] were almost coming back to us, we were still able to keep our composure and finish to the end.”

However, the most crucial key to the team’s success in this game has been something they’ve been working on all season, but faced difficulty with.

Although head coach Cameron Johnson has been a part of the Jefferson girls basketball program for years, this particular win was especially meaningful.

“Our first win was long-awaited, and I was especially excited for our coach because it was her first win as varsity coach,” Awofisayo said. “She’s been the [Jefferson girl basketball] assistant coach for a very long time, but this was her first year as head coach. I felt that she definitely deserved [the win], so I was happy for her.”