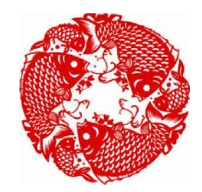 A fine example of folk art in China, this origami window decoration depicts fish and is representing wealth. Nowadays these masterpieces are mass-produced in factories, but it is definitely enjoyable to sit down and spend some time on creating your own unique decorations.

New years are a new beginning for many, a revered date in American culture. Less celebrated is its Chinese variant, the Lunar New Year. The Lunar New Year is based on Chinese mythology and has deep roots in Chinese culture.

The date of the Lunar New Year fluctuates from year to year. In 2019, it was celebrated on Feb. 4, and this year, it will be celebrated on Jan. 25. The holiday is celebrated on different dates every year because it occurs every 12 new moon cycles. Instead of representing a new beginning, the most common interpretation of this holiday is a time for family, reflection, and reunion.

There are many unique traditions to the Lunar New Year, one of which includes wearing red. The mythological roots for this tradition is the superstition that red clothes ward off evil spirits. There is also a folktale of a creature that plagued a village every year until the creature’s weakness, the color red, was discovered, leading to people wearing red every year to ward off that creature.

The years are also named after the twelve Chinese zodiacs, and they are represented by twelve animals. They are, in order, rat, ox, tiger, rabbit, dragon, snake, horse, goat, monkey, rooster, dog, and pig. People born in the same year, according to Chinese mythology, are supposedly similar in personality. Furthermore, people born in the year of the dragon are said to become more successful than people born in the other eleven years. This year, 2020, is one of the years of the rat.

A lot of preparation goes into this celebration. One part includes the decorating of the doorway with proverbs for fortune and success written in traditional calligraphy. Another part is decorating your windows with red paper cutouts, an example of which is in the picture above.

When the celebration begins and one waits for midnight, the annual Lunar New Year shows Spring Night, is aired. In China, it plays on CCTV, is broadcast all over the country, and is state-sponsored. Although it does not play in America, there are reruns available online. The morning after the new year, people gather in public areas and set off fireworks, both new and old-fashioned. Old fashioned fireworks consist of a chain of smaller fireworks that only produce a loud sound when met with a spark.

An even bigger part of celebrating the New Year is the food, a big piece of Chinese culture. During the middle ages, families and their extended family would gather and eat dumplings, a commodity that requires many ingredients that were hard to get in the Classical age. Nowadays, we eat dumplings along with many other food items like fried bean cakes. The food varies across regions in China, but it is much more extravagant than normal meals.

How people celebrate the Lunar New year varies between families. My family puts up decorations on the windows and hangs up red lanterns. Because one of my parents works in China and usually cannot make it back to America in time, we talk for a large period of time over WeChat, eat traditional foods, and stay up until twelve o’clock at midnight.

The Lunar New Year, a time for reunion and celebration, has deep cultural and mythological roots in China and holds significance in the hearts of many. It is one of the holidays that workers in China look forward to as a chance to visit their families–whether it be virtually or in person.