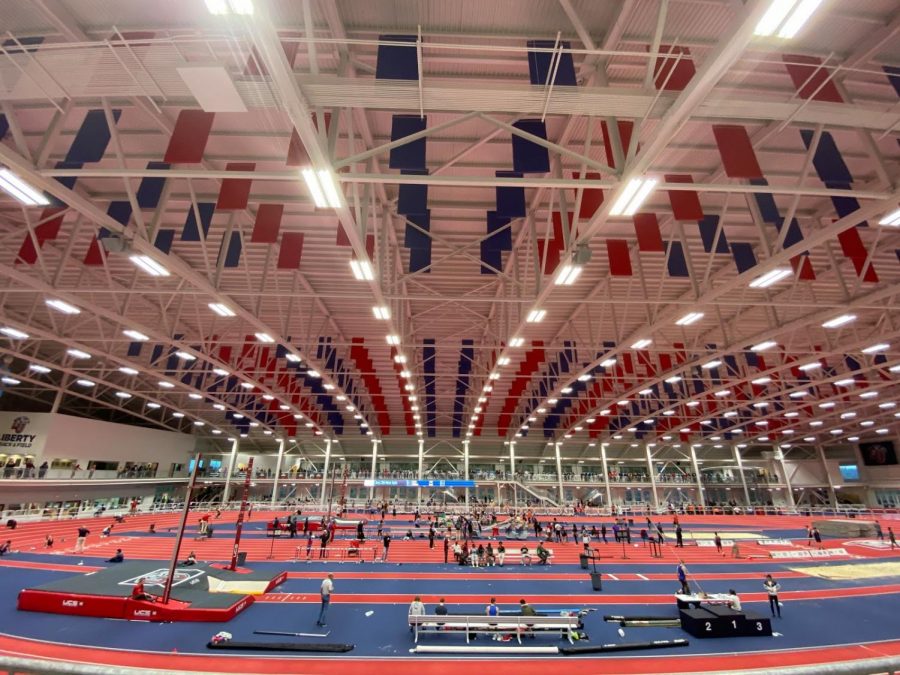 High school students from around the East Coast tense against the starting block in anticipation of the signature starting gunshot. On the chilly morning of Jan. 11, Jefferson track members competed at the Liberty Premier Invitational meet at Liberty High School. The meet is an annual competition between schools from Virginia, West Virginia, North Carolina, South Carolina, Tennessee, Pennsylvania, District of Columbia, and Maryland.

“I’m a mid-distance runner so I ran the 500-meter dash,” junior Anup Bagali said. “It was all right, but it wasn’t that quick. I [set a personal record] of 1 minute 17 seconds which was an improvement by seven seconds.”

Bagali placed 64th in his event out of 117 competitors. Girls and boys often compete in the same events, but rankings differ based on both the event and the gender.

“I ran the 55 dash and 4 by 2,” said junior Tammy Ding. “At first I was unsure of how well I’d do in this meet because there had been 2 weeks of winter break, and we also had 2 snow days in the week before the meet. I didn’t feel as prepared as I could have been, but thankfully, I [set a personal record] with 8.01 in the 55m when my previous [personal record] was 8.07 seconds.”

While performance is an important aspect of any sports event, the thrill of crossing the finish line as well as exploring the campus and city are what stuck with Jefferson students.

“It was my first overnight meet, and I’ve only heard stories from previous years,” Bagali said. “The bus rides and just chilling in our hotel rooms at night [lived up to my expectations].”

On the other hand, performance at these important events can be a reflection of hours of hard work and practice, and runners can often feel frustrated with their results if they strove to perform better.

“My goal was actually to break eight seconds and it frustrates me that I was so close,” Ding said.  “I definitely could have done it at this meet, but it’s okay because it gives me hope that I can definitely achieve my goal by the end of this season.”

The next step for Jefferson track members is to qualify for and compete at districts in the post-season.

“Schools usually send their top three runners in each event to compete at districts,” Ding said. “We only have two more weeks before districts. I’m not that worried about making it, though, because I’m currently the fastest 55m runner on the girls’ team, and I’ve also gone to districts every season since freshman year.”