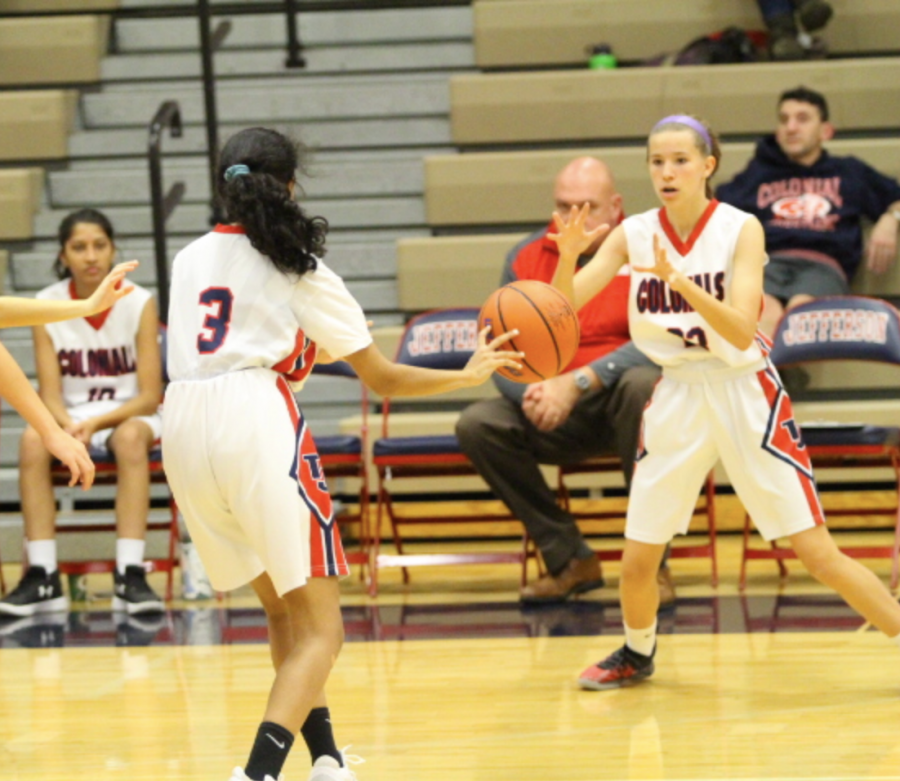 A player completes a pass during a play. " I think we focused a lot on smaller technical things which allowed us to get stuff done," Awofisayo said.

Jefferson’s Varsity Girls basketball team lost to the Falls Church Jaguars in a close 46-49 game on Friday, January 10. Almost halfway into the season, the team still has yet to win a game with a record of 0-11.

Despite the loss, some team members felt that the game was still a success, as they got more comfortable playing with each other and had more confidence in themselves.

“I think our offense was really good because a lot of us were more comfortable with trying no things this game and not being scared. So we were able to work together because we weren’t scared of messing up, which allowed us to be more creative,” forward and sophomore Damilola Awofisayo said.

However, there were also aspects of their game which could improve, such as their intensity levels throughout the game.

“I feel like our intensity levels kind of fluctuates – sometimes we have high levels of intensity and sometimes they’re lower,” Awosifayo said. “But the more we work together I feel we can get the same high intensity levels throughout the game so we could have a more consistent performance.”

During the first half, Jefferson held a slight 4-point lead with a score of 27-23. However, during the second half, Falls Church was able to make a comeback and established a 5-point lead in the third quarter, which Jefferson was not able to overcome.

“The game started out close, but the other team made a big comeback in the second half and ended up winning,” guard and freshman Ellie Rowland said. “I was still happy to see the game get that close though.”