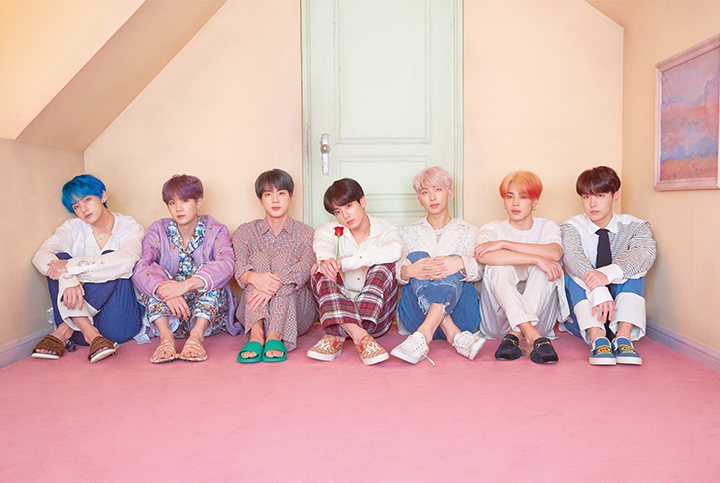 In 1992, a trio of singers known as Seo Taiji and Boys gave their debut performance of “I Know,” marking the shaky birth of a new genre of music known as K-Pop. More than two decades later, this genre has smashed world records, amassed an almost cult-like following, and become a worldwide sensation. With groups like BTS, BlackPink, and TWICE topping Billboard charts and making appearances at the Grammys and Coachella, the popularity and allure of these groups are undeniable.

K-pop has also expanded beyond the trappings of fluffy pop music to touch upon topics that resonate with its audience, whether it’s about mental health or youth violence. K-pop groups have made the cover of Time magazine and given speeches at the United Nations, cementing their importance on the global stage. Whether you’re in it for the fluffy pop, the sexy tunes, or the powerful social message, K-pop has something for you.
1. Boy With Luv – BTS feat. Halsey

Riding on their worldwide, record breaking success from the year before, boy band BTS does it again with their pop hit “Boy With Luv,” featuring American singer and songwriter Halsey. Released on April 12, 2019, the lighthearted bop became the most-viewed YouTube video in 24 hours with a staggering 74.6 million views. It currently holds the record for song with the most South Korean music show wins, with 21 total, and as of December 2019, has garnered over 650 million YouTube views. With funk pop tunes and addicting melodies, “Boy With Luv” perfectly blends the light and airy vocals of Halsey and BTS in all the right places. Especially for listeners unfamiliar with the K-Pop, “Boy With Luv” is the perfect non-intimidating introduction to the genre, incorporating elements of Western mainstream pop while maintaining roots in South Korean music.
2. Kill This Love – BlackPink

Bold and in your face, BlackPink’s “Kill This Love” captures the inner turmoil and bittersweet feelings of finally letting go of a toxic love interest. Recorded by South Korean girl group BlackPink, the electropop song was released on April 4, 2019, as has accumulated over 700 million views on YouTube since. Nearly matching the global success of boy group BTS, BlackPink has won the hearts of even mainstream Western pop listeners with their balance of girl crush and sweethearts vibes. With hard-hitting bass beats, blaring horns, and strong vocals, BlackPink pulls listeners’ heartstrings in a battle of tug-of-war as the brassy chorus and rap features rebound off of a passionate, tearful pre chorus.
3. Fancy – TWICE

With over 102 million streams on Spotify, TWICE’s “Fancy” is a dynamic and catchy song that brings a bolder, sexier energy than the group had before. While the song still keeps the quirky festive tone and upbeat energy that has become a trademark of all of TWICE’s music, “Fancy” features more mature vocals and a bolder styling, with lyrics such as “It doesn’t matter who liked who first” and “I won’t ever let you go” lending a fiercer edge to the song. Addictive and playful, you will easily find yourself adding to the over 250 million views on Youtube.
4. Say My Name – ATEEZ

Rookie boy group ATEEZ took the K-Pop scene by storm at the start of 2019 with their  follow up album, Treasure EP.2 Zero to One, featuring grungy, dynamic lead single “Say My Name.” Combining cheerful, adventurous tropical vibes with hard-hitting hip hop beats and EDM soundtracks, “Say My Name” takes listeners on a wild roller coaster of emotions. The boy group, despite having debuted fairly recently, have amassed a large international fanbase due to their unique, mysterious pirate concept, rough and charismatic stage performances, and addictive choruses.
5. Psycho – Red Velvet

Released two days before Christmas, Red Velvet topped the Billboard’s World Digital Song Sales after selling 2,0000 downloads of “Psycho” in just one week. The R&B-pop track follows 2018 single “RBB (Really Bad Boy)” as Red Velvet’s only other chart-topper on World Digital Song Sales putting them in an elite group of K-pop artists with more than one single to hit the top spot.

The track unveils over a plodding, trap-assisted beat that reminds us of the pop-r&b of the mid-00s. The instrumental backdrop feels simple, allowing the vocals to do the majority of the hard work. There are some falsettos in the pre-chorus and we love how the group sing the chorus together, making the song feel more impactful. Addictive and swaying, the chorus enhanced the song’s allure, and the melodies kept the song feeling fresh and smooth.
6. Gotta Go – Chungha

Released just two days into the New Year of 2019, “Gotta Go” is a song recorded by South Korean singer Chungha. Unlike her previous album Hands on Me and Offset, she has shifted her tone from a “girl crush” image to something more sultry, with vibrant flute sounds and squelching synths acting as a backdrop to rich vocals. The single brought Chungha her first music program trophy at MBC Music’s Show Champion on January 9. As of January 2020, it has over 65 million views on YouTube and 54 million streams on Spotify. If you are looking for a song with smexy vibe, darker aesthetics, and smooth vocals, “Gotta Go” is the way to go.
7. gogobebe – Mamamoo

Although not as widely known as some girl groups like BlackPink or TWICE, Mamamoo holds its ground with one of the strongest vocals for any group in the genre. Their highly addictive “Gogobebe” advocates self-care within its boppy lyrics and carefree tunes. Released on Pi Day, the song has since topped the iTunes album charts in 11 countries and entered the top five rankings in over 21 countries. An upbeat song with a catchy melody, bold colours and outfits, and unique aesthetics, you won’t be able to get “Gogobebe” out of your head.
8. BET BET – NU’EST

After their late rise to fame through South Korean survival show Produce 101 Season 2, seven-year-old veteran boy group NU’EST returned for the first time with all five members in April, releasing their sixth EP Happily Ever After which featured lead single “Bet Bet.” The dreamy, fairy-tale-like track mixes future bass and R&B genres that merge into a mature sounding masterpiece. NU’EST’s vocalists’ mystical, soft vocals build up to an impactful chorus marked by fierce high notes broken up by melodic low-tone raps. The song dreamily expresses feelings of reckless love with the boy group members proclaiming that they “will bet everything for you.” It’s a dreamy tune that doesn’t disappoint as NU’EST’s new beginning into their journey towards K-Pop stardom.
9. All Night – ASTRO

New and improved, boy group ASTRO made a comeback with lead single “All Night” last January, their second release after a long hiatus. The romantic, whimsical track blends modern EDM with retro synths as the members croon about their desire to call their lovers all night. In comparison to their past preppy, boyish songs, “All Night” brings out a drastically more mature sound as ASTRO’s soulful vocals take the main stage while minimalistic, soft, fresh instrumentals decorate the background. It’s the perfect song for pleasant, peaceful nights of reflection.

Check out these songs on Spotify: