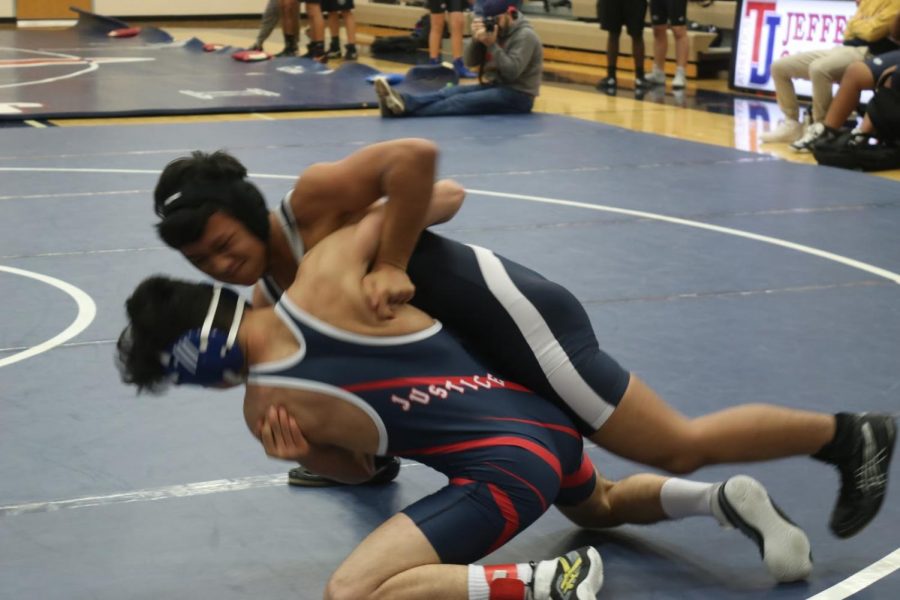 Getting his arm under his opponent, sophomore Ahmad Barokah attempts to drive him into the ground. Barokah, who was down eight and in danger of losing by technical fall, got the pin and 6 points for Jefferson.

If you are unfamiliar with wrestling’s scoring system, please visit our guide.

The varsity wrestling team won 39-33 against Justice High School on Dec. 18 in its first meet of the season.

The team won the first two matches by fall to go up 12-0, but as Justice began to win matches, the score evened out. The final match ended up determining the score, resulting in a victory for the Colonials.

“At the beginning, I was thinking that this would be another meet where TJ was just gonna lose again,” sophomore Ahmad Barokah said. “[But] at the very end it was basically dead even and our 195 [got] a pin. No way I thought that would happen.”

The victory came despite adversity stemming from a player’s absence.

“I think we did pretty well at the meet. I was a little worried that we were going to lose,” junior Brianna Ta said. “I was really nervous for this meet because I was going up a weight class since our varsity 113 [wrestler] was sick.”

Jefferson’s triumph marks its first step towards making and getting a high seed at districts this year.

“Justice is in our district, so how we wrestle against them will determine our seeding at districts.” Ta said. “You want a good seed because that will give you a better chance at winning your matches and getting farther.”