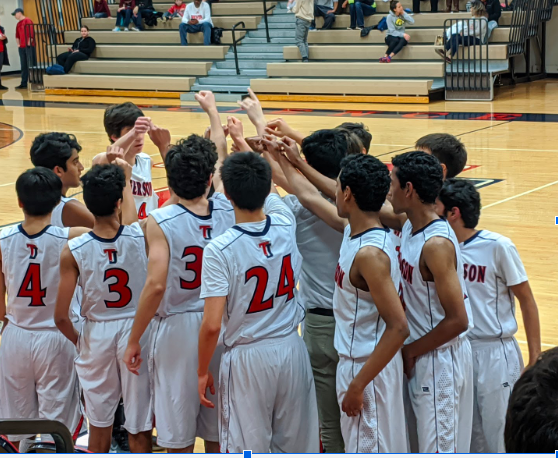 The boys gather around to recite their chant after what would be the final timeout of the game. “We should take this last game and use it to improve by never giving up and [continuing to] persevere,” Gundu said. The basketball season lasts until mid-February, so the team will be able to apply what they learned here for the majority of the season.

Jefferson’s junior varsity boys basketball team lost a close game to the Annandale Atoms on Tuesday, Dec. 10. This was the first official  game played at Jefferson this season, which they lost 54-53.

Previously, the team played two scrimmages against Tuscarora High School and George Mason High School, as well as an away game against Manassas Park High School. Though they lost the first scrimmage, they won the second scrimmage and the first game. Annandale won the game on Tuesday as closely as Jefferson won their scrimmage against George Mason.

Jefferson built an early lead, ending the first period with a score of 13-7. During the second period, Annandale was able to take the lead, despite Jefferson players catching a few difficult rebounds. However, during the third period  Annandale had a 27-point run, while Jefferson was only able to score two baskets. The score at the end of the third period was 33-45.

“At first we got off to a really good start, but then they got control [of the ball],” point guard Vinay Gundu said. “I think we got a bit overconfident so we played a bit relaxed.”

Jefferson attempted a comeback during the fourth period, and through a few solid offensive plays and free throws, they were able to significantly narrow the score gap to a single point within the final minutes of the period. The last shot Jefferson made was a three-pointer attempt eight seconds before the final buzzer, and unfortunately it just barely missed the basket. Annandale took the ball back to their end of the court, ending the game with a score of 53-54.

“We didn’t lose our fight and we kept going,” Gundu said. “It was still a really big accomplishment for getting the game that close [in score] again.”

Despite the loss, the team is looking forward to applying the lessons they learned from this game to the remainder of the basketball season.

“We learned some of our weaknesses in our offenses and defenses,” Li said. “During practice we just have to make sure we practice those and make our plays better.”