To lock or not to lock?

As Jefferson sees an increase in lock usage, debate rises over cubby space. 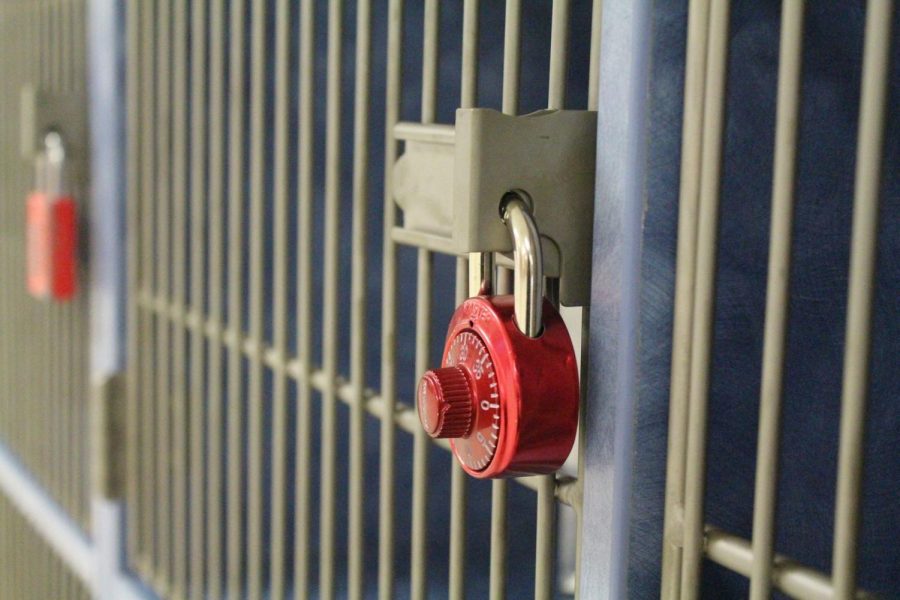 Locks secure many of the cubbies at Jefferson, including this one in the audlob.

Walk into Jefferson from the buses, and the first thing you’ll see are the rows of marble blue cubbies along the walls of the audlob. Some store backpacks, others store food. Some have locks, and others don’t.

Jefferson has a unique storage system in that instead of the lockers that line the halls of the typical American high school, cubbies are scattered all around the school for students to drop off and pick up belongings anytime, anywhere. No one is assigned a locker, and no one receives a lock. Rather, most Jefferson students claim cubbies simply by storing their belongings in them, while others buy locks for the extra security measure.

Sophomore Arya Sapra, a froshmore, prefers Jefferson’s cubbies over his base schools’ lockers.

“I think it’s pretty convenient actually. I’ve dropped off my stuff and just left it in a random place many times, and I haven’t had any problems with stealing. Obviously if you have food and stuff you’ll probably need locks, but for me it’s worked out pretty great because they’re all over the school and they’re pretty convenient to put your stuff in. I think they’re much more efficient than what we had at base,” Sapra said.

However, a recent Facebook post by sophomore Erin Tran has sparked conversation on the use of locks on cubbies. A cross country and track runner in all three seasons, Tran visits her cubby everyday. A few weeks ago in November, another student took her running shoes, laptop, and folder out of the locker and put a lock on it. Nonetheless, Tran believes Jefferson is a relatively safe space in terms of storage.

“I know people have gotten food stolen from their cubby, but that just seems to be a common TJ crime. But for actual valuables, no. I feel more safe leaving valuables in my locker without a lock at TJ because I trust the students of TJ. I don’t think I would have done the same at my base school,” Tran said.

Tran doesn’t believe there’s a problem with permanently storing belongings in cubbies with locks. Stealing people’s cubbies, on the other hand, is an entirely different subject matter.

Freshman Jaylen Pilgrim, on the other hand, stores his shoes, lunch, and backpack in a locked cubby as a precaution to secure not only his belongings, but also the cubby itself.

“I use a lock for two reasons. One, I don’t want people taking my stuff. Two, that way I can use my locker forever,” Pilgrim said.

Tran doesn’t believe we should need locks, but understands that there are circumstances where students would want locks.

“I hoped that the people at TJ had a good enough consciousness that they would keep to themselves and not feel the need to go through other people’s lockers. I would like there to be no locks but I know some parents are picky about their kid’s stuff, so they get their kids locks. It’s just personal preference,” Tran said.

Stealing cubbies is not the only problem TJ students are facing in regards to locks. In light of the recent surplus of locked, empty cubbies in the audlob, the SGA is working on a proposal for a week long awareness campaign where sticky notes would be put on those empty lockers. Afterwards, any locks on empty lockers would be cut by the security team.

“Cubbies are supposed to be shared spaces, which are fine to lock. But unlike lockers, you shouldn’t be allowed to claim the space if you aren’t using it,” senior SGA President Ronith Ranjan said.

That’s where the problem lies – not in the use of locks in general, but in the unfair claiming of cubbies without utilizing the space.

These empty lockers have led to limited storage in the audlob, especially for athletes who need space to store a change of clothes.

“For students who play sports (we have close to 300 students each season), there’s not enough space in the cubbies for the students,” Ranjan said.

The SGA doesn’t believe that this usage of locks aligns with the design of the building.

“The renovation was designed with the intent that the students don’t create these locker spaces, they create a place that if you have a class you put it in there for the day and you keep there,” Ranjan said.

Ultimately, in the midst of these cubby conflicts, it is important to remember cubby etiquette to keep TJ a place where people feel safe leaving belongings unlocked anywhere, anytime.

“It’s wrong to take someone else’s locker,” Tran said. “If there’s stuff in it, don’t touch it. It’s not yours.”