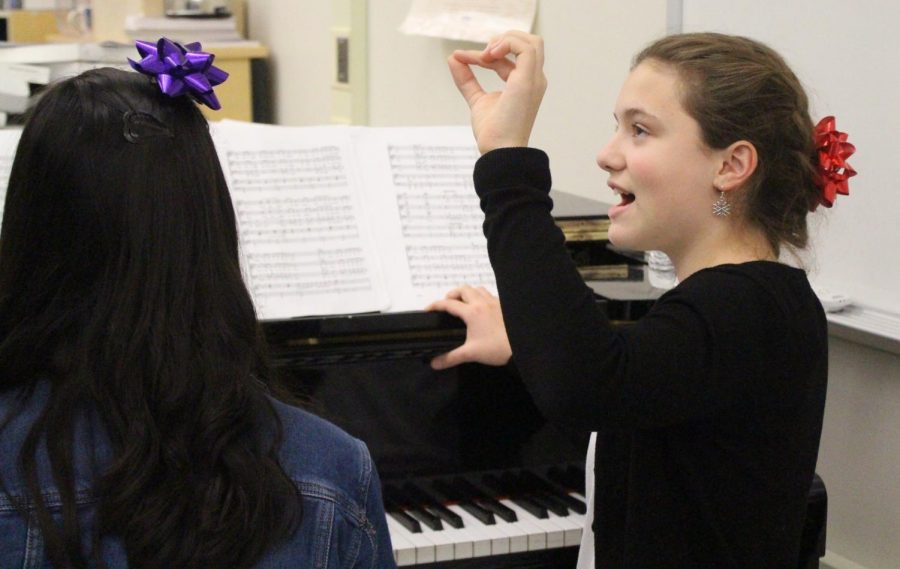 With only voices and no instrument accompanying it, a small group of singing voices break through the sound of a typical school day. Through persistent efforts, sophomore Michaela Wells is trying to recreate her middle school passion of singing madrigals in the Jefferson community.

After finding a lack of singing activities, Wells decided to take matters into her own hands and create her own madrigals group, in which students could find a space to expand on their passion of singing.

Madrigals is a form of entertainment that was performed during the Renaissance and it is typically performed as an acapella, with six to 12 voices and no instrumental accompaniment. Madrigals is typically characterized by rhythm and harmony contrast, as it focuses on the harmony between voices being equal rather than focusing on an instrument playing at the same time.

“My favorite part about the group was making awesome music with a group of dedicated students who really cared about it because in chorus there were a couple of people who cared and a couple of people who didn’t. But this was a group that to be in it you had to give up some other activities. People really cared [and] in highschool, I am trying to recreate that,” Wells said.

In middle school, Wells was very involved with music, as she did chorus and orchestra. Her passion for singing drove her to try out for the highest level of choir, madrigals, and it was in this small group that she found her love for madrigals. She continued this throughout middle school and wanted to branch that opportunity out to other students.

“One great thing is that it doesn’t conflict with other activities as much for me because we practice during lunch and there is no curricular choir this year, but there was one last year. This helped us fill the void in that us, choir people, have in our hearts because we don’t have a choir anymore,” sophomore Abhiram Srivastava, who participated in Wells’ middle school madrigals group at Luther Jackson Middle School, said.

The group’s first performance will most likely be at a coffee house alongside the Jefferson choir in January.

“We are probably going to perform for the next ITS coffee house, which is a theater sponsored event and choir sings there. I think the next one is in January and we may end up doing one before that, but if so I need to coordinate that with choir and if they are doing one before that, then we can jump on and sing a song or two,” Wells said.

Ultimately, for many passionate singers, it provides an opportunity to learn about a new style of music and a sense of belonging with others that share the same passion.

“It is just a really unique style of music that people do not know about. It is important for the same reason you learn history. We learn about history to understand how humanity has changed and that’s something interesting to do with music too,” Well said.