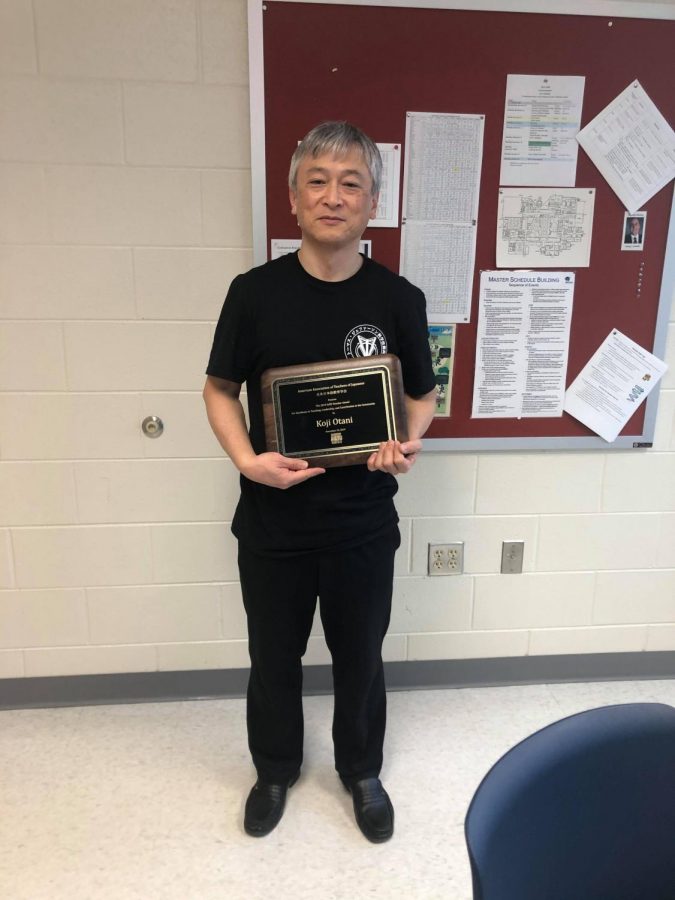 Smiling, Jefferson teacher Kojei Otani poses with his award from the AATJ

After thirteen years at Jefferson, Japanese teacher Koji Otani was recognized by the American Association of Teachers of Japanese (AATJ) as the receiver of the 2019 AATJ Teacher Award.

Otani began teaching in 1998 at Floris Elementary School in Herndon as a Japanese Immersion Teacher. He taught in the Immersion program until 2006, which is when he began teaching Japanese at Jefferson. Within the classroom, Otani encourages his students to dig deeper into the Japanese culture and language.

“As a teacher, I feel he’s he’s not really like the teacher that you’ll see with a lot of people. He feels more human, like you can actually interact with him. It’s more of a go with the flow kind than a here’s the lesson plan, stick to it go through everything,” sophomore Luke Sedlar said. “And I think part of that is he keeps us up with  modern Japanese news and [other] events that are happening around the world. That adds another level that I don’t really get in any other classes.” Sedlar said.

Otani credits the recognition to not only his teaching acumen, but also to the familiarity that other Japanese teachers have with him.

“Probably among all the Virginia Japanese teachers, my name is [the] most recognizable because I go to meetings all over the place. And I’m one of the AP Japanese readers, and also make AP exams and the Japanese SAT too,” Otani said.

Additionally, Otani attributes all of his success not just to himself, but to his colleagues who have supported him tirelessly.

“I feel very humbled. It’s not a personal award. It’s a collective group effort,” Otani said. “ I’m happy for the area teachers that my name came up on the country’s homepage and some regional newspapers because they talk about the Japanese program. So in a way, the Japanese program is more visible because of this award.”