Power of the podium 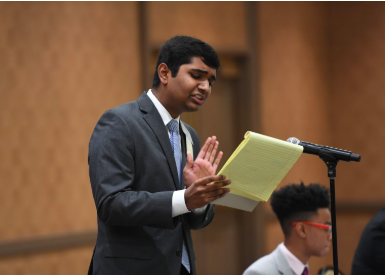 At the 2019 National Speech and Debate Association National Tournament, senior Manu Onteeru speaks passionately to a panel of judges about data privacy and stricter government regulations. Photo by Grace Rogers.

Sweaty hands. Shaky legs. Swarms of butterflies. These are symptoms that senior Manu Onteeru must overcome every time he stands up to speak on stage.

“My main event since seventh grade has been Congressional Debate, which emulates the US Congress,” Onteeru said. “It’s a style of debate in which speakers have to combine sourcing with emotion and logic in order to provide compelling arguments regarding specific policies, whether it be admitting Syrian refugees or making vaccines mandatory.”

What makes Onteeru stand out among his peers in the Jefferson Congressional Debate club is his extensive achievements in the event. Onteeru is ranked number one in the world by the National Speech and Debate Association. He won the Columbia Invitational, was a finalist at the Harvard National Debate Invitational and a two-time finalist at the Yale Invitational. Onteeru also came second at the New York City Invitational, which is the biggest high school-run Speech and Debate tournament internationally. He won the Bluebonnet Worlds School Debate Tournament and was invited to compete with the USA Debate Team in his junior year.

“At a really young age, I was interested in policy, but I just didn’t have a way to express that love,” Onteeru said. “In seventh grade, I decided to join my base high school’s debate team to get a grounding in how to articulate my ideas and how to do more in-depth research.”

Most student debaters start in middle school like Onteeru. However, Onteeru found that once he came to Jefferson, he was able to join the Congressional Debate team and his competitive success grew from there.

“[Jefferson’s debate club] has been really helpful in allowing me to compete nationally for the first time,” Onteeru said. “Since then,  I’ve kind of taken those resources and made them my own. A lot of my competition now is as an independent, but I’m still really grateful because they gave me those foundations that I need to succeed.”

Since Congressional Debate is an individual form of debate, much of the preparation rests on the student. Students must be able to effectively argue their position and refute opposing points.

“Honestly, a lot of debate is just about finding your own style and what works with you,” Onteeru said. “For years and years I tried to emulate people who I thought were good, but when I started winning awards I realized that was because I was speaking in a way that was most comfortable with me. Some judges like it, some judges don’t like it, but you’re likely to perform your best when you’re not trying to change who you are.”

For Onteeru, debate taught him the most when it expanded past emulating the United States Congress.

“My worldview changed when I competed as a part of Team USA in my junior year,” Onteeru said. “I had to not only debate US policy initiatives but also compete against international teams about global issues. When you’re competing against teams from Canada and Nigeria, you’re hearing a viewpoint from them that’s been indoctrinated from their cultural norms. Just hearing that ideological clash has been really interesting, whether it be directly policy-related or about ethical or moral issues.”

As for the future, Onteeru is unsure about what he wants to do and where he wants to go. Although debate has played such a large role in his academic life, he believes that the public speaking skills he attained are what will stay with him on the international level as well as in college.

“I have no idea what I want to do,” Onteeru said. “Maybe medicine, maybe consulting, maybe pharmaceutical, maybe engineering if I go really crazy. Still, public speaking is always a useful skill to have. The power of your voice cannot be understated.”