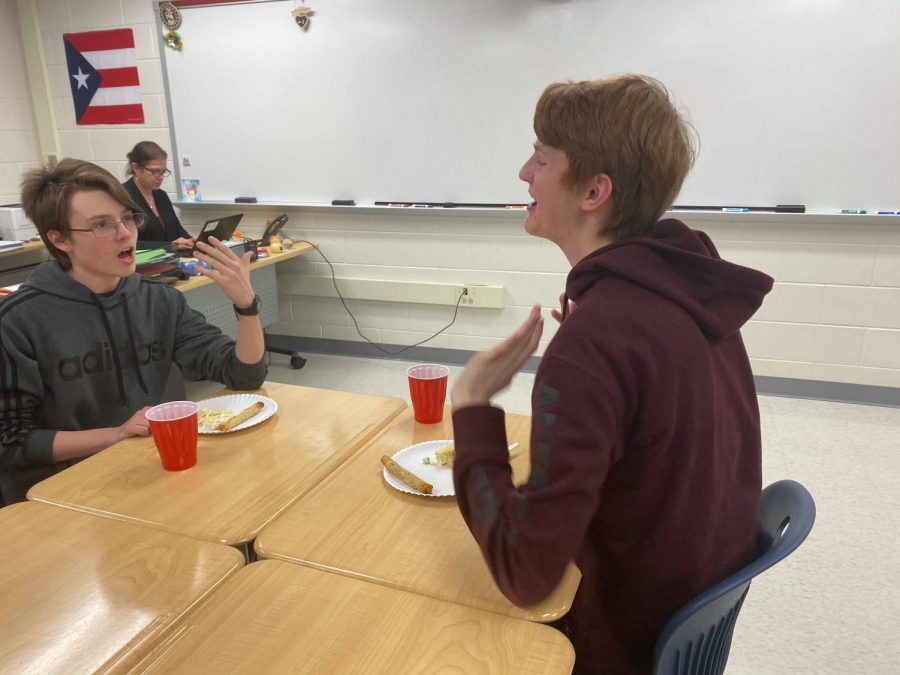 Sophomores Pearson Frank and David French converse while enjoying the refreshments provided at the Thanksgiving Feast. “I enjoyed being able to eat food while hanging out with my friends,” Frank said.

The Spanish Culture Club (SCC) hosted its first Thanksgiving Feast on Wednesday, Nov. 20 during eighth period. A variety of food items was offered for attendees, such as tortilla chips and brownies. Although the SCC initially planned the event to take place around Dia de los Muertos (Day of the Dead) in early November, they had to reschedule the event due to scheduling issues.

“We wanted to have a big event for SCC and food was a big motivator,” SCC president senior Patrick Hutecker said. “We were originally going to do something for Dia de los Muertos, but it didn’t work out with scheduling, so we weren’t able to do something big for that.”

Despite the unanticipated scheduling change with the event, Hutecker was still content with how the event turned out and what it accomplished.

“With this event specifically, I wanted to give more attention to the Hispanic presence at TJ. It’s not very big, obviously, but there’s no real community for it and the club is just like to get more people to come together and learn about the culture,” Hutecker said.

Sophomore Sruthi Sankararaman, another student that attended the event, enjoyed the event because she was able to spend time with her friends while also celebrating Thanksgiving.

“I’m so thankful for my friends and family and the [Jefferson] community. And so I really wanted to come here and celebrate with other people who feel the same way,” Sankararaman said.

Additionally, Sankararaman attended the event because she liked the message and purpose of SCC.

“Spanish has a really good, fun culture, and it has a lot of meaning, so it’s really fun to be able to learn about a new culture and experience it better,” Sankararaman said.