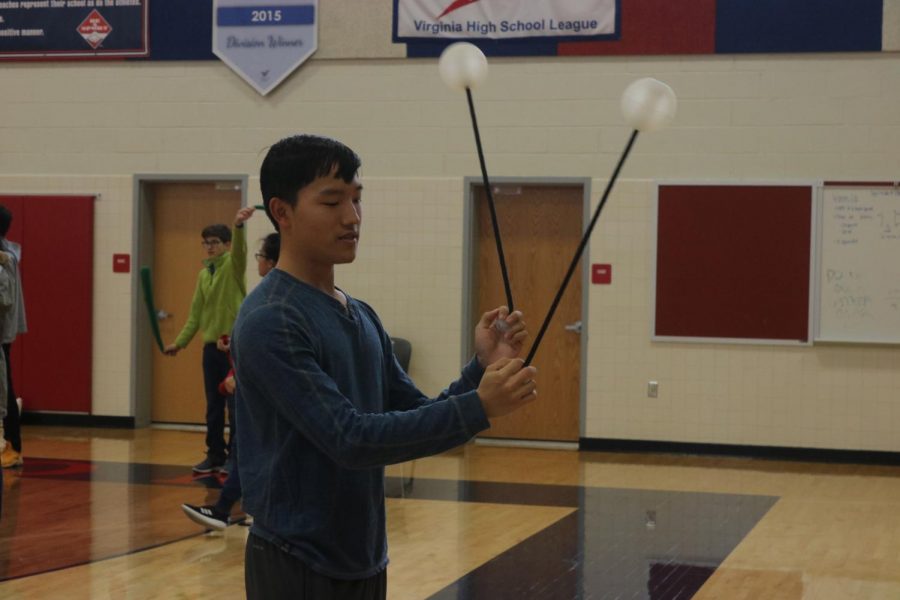 Senior Victor Xia demonstrates flowers, a move Xia describes as following a mathematical rose curve, to more experienced newcomers. “Most performance arts are in the light, so the idea of performing in the dark was a fresh experience,” Xia said. “Poi is one of the most visually impactful acts at iNite. If you feel intimidated by how hard everything looks, majority of the people in poi were also completely new when they joined.”

Jefferson Poi Club held their first clinic of the year, a short course on the basics of poi, on Friday, Nov. 15 for both experienced members and interested beginners.

Poi is a performance art derived in New Zealand. The word “poi” refers to the tethered weights used in these performances. In recent decades, lights and flowing fabrics have been incorporated into the art.

The poi clinic welcomed both beginners and returning members in learning the foundations of the tricks and choreography.

“We prepared lessons for everyone from complete beginners to veterans of the group,” senior Victor Xia said. “One of the primary goals of the lessons were to teach people various poi moves that might appear in the iNite choreography coming up.”

The clinic was also a way to expose more Jefferson students to the art of poi. One of the main purposes of the clinic was to introduce the art to beginners.

“The clinic was open to everyone, so naturally more focus was placed on getting people interested in poi,” Xu said.

The newcomers felt nervous at first about trying poi, especially since it was something a lot of them had never tried before.

“I have never done poi before,” freshman Yashna Hasija said. “In the beginning, I was not that good. Eventually, I kind of learned a lot of new stuff. The advanced poi members were there to help us out, which was really nice.”

Many of them were interested in the opportunity of being able to try poi that others would not have. Like other activities that Jefferson has to offer, poi is a unique performance art.

“It was a new exposure to a completely different thing,” Hasija said. “This is something they probably don’t have at different high schools. I think that people should appreciate that more and take advantage of it.”

Learning the moves was certainly difficult, but beginners considered the hardship as part of the fun.

“My favorite part was learning new tricks and struggling, actually,” Hasija said. “There was this butterfly trick that was a little hard to get the hang of, but in the end it was super fun to do and it looked really cool.”

Whether they had background in poi or not, the students learned many new skills from this clinic and enjoyed the experience. The clinic was able to educate about the beauty and distinctiveness of poi to Jefferson students.

“It was fun to try something new, and I definitely want to go again,” freshman Srishty Muthusekaran said.