The Curious understanding of autism awareness 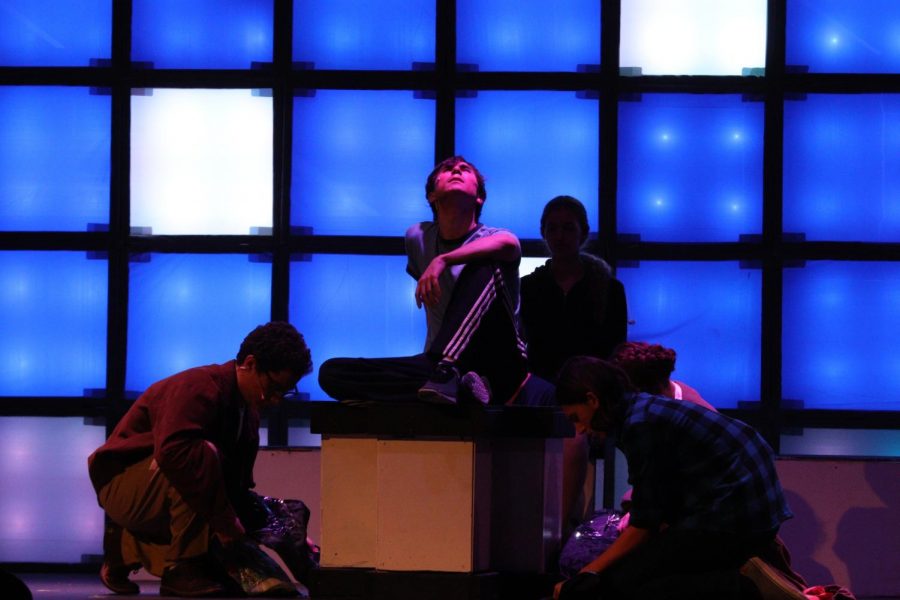 The Curious Understanding of Autism Awareness Christopher, played by senior Joshua Mutterperl, fantasizes about becoming an astronaut. This scene follows a tense encounter between Christopher and his father and lightens the mood. “It's a free and uplifting moment in this play, [which] comes after a more serious moment. And in it you can feel the sense of being lighter than air, in zero gravity and then it ends in a grounded place,” Mutterperl said.

“Does that mean I can do anything?” Christopher said in the last words of the play The Curious Incident of the Dog in the Nighttime. Frankly, he can.

Jefferson’s fall drama performance The Curious Incident of the Dog in the Nighttime is based off a book of the same name written by Mark Haddon about Christopher, a boy with autism. The play follows Christopher, played by senior Joshua Mutterperl, as he investigates the murder of a dog, grapples with new circumstances, and uncovers secrets about his own life.

“The role is very much about exploration. As Christopher discovers the world around him and interacts with it. Every night [the whole show] feels new, engaging and exciting to perform,” Joshua Mutterperl said.

Most viewers of the play do not face the same daily struggles as Christopher, but Christopher is really just as human as the viewers. Striking the balance is key.

“I want him to be relatable but also authentically himself. I wasn’t trying to push him to be more “typical” [but] to capture a truthful performance of this very real and human character,” Mutterperl said.

Although the book and the play are widely acclaimed, they have been the subject of controversy for those within the autism community. Online, family and friends of those with Asperger’s syndrome state that the play promotes a stereotype of how people with autism act. Jefferson’s drama team thought of it more on a case by case basis.

“Christopher in no way represents every autistic person, but his character definitely gave me more clarity on the way people with autism perceive the world,” assistant stage manager sophomore Jay Abraham said.

The Curious Incident of the Dog in the Nighttime allows viewers to understand Christopher on another level with its unconventional set. One feature of the set was a 60-cube LED lit grid controlled by circuits and code that the tech team put together over months, starting in the summer.

“[We made] the grid because we thought it could give a lot of depth to how the play is viewed- it displays interpretations of Christopher’s thoughts and the things around him, and also shows off our amazing techs,” Abraham said.

The grid also helped viewers understand how Christopher felt, especially when it was not evident from the dialogue. This helped the audience to empathize with him, and shift the whole mood of the play altogether.

“The background lighting really changed the mood of the entire play. Different lights symbolize different emotions. Color does affect the play and how we, the audience, felt,” freshman Aditi Shukla said.

The Curious Incident of the Dog in the Nighttime brings light to an underrepresented community while maintaining themes to which that all viewers can relate to.

“The autism spectrum doesn’t get talked about a lot and certainly not in a positive or encouraging light,” Mutterperl said. “[This play] focuses on what Christopher is able to accomplish. It’s a message that everybody could learn from.”