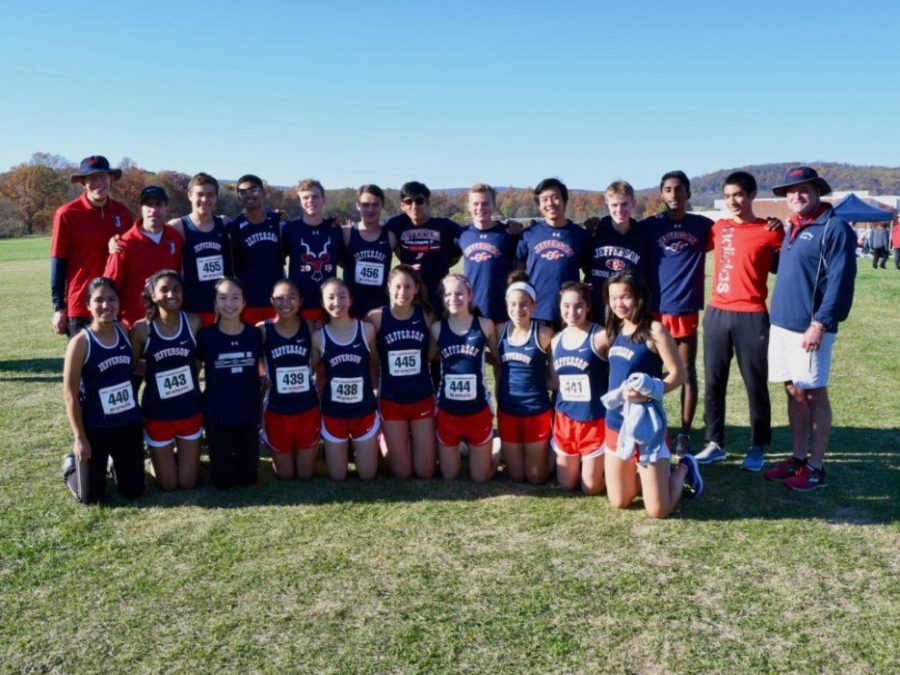 Placing their arms around each other, the cross-country team poses for a picture after the Regionals competition “At regionals, [the boy’s team] got 3rd place and qualified for the state meet. The girls team also got 3rd and qualified, and we are all really happy about it.” cross-country captain Tucker Stanley said.

Both the girls and boys cross-country teams placed third at their regional competition on Nov. 6. This qualified both teams for states, which takes place on Nov. 15 and 16.

Sydney Szabos placed second overall, the highest out of Jefferson girls runners, while Ethan Stanley finished with the top Jefferson boys rank, twelfth place overall. As for the rest of the Jefferson field, a significant number of runners set personal best times.

“We all really wanted to make states and we knew it was going to be a close race.” Cross-country captain Michelle Du said.“On the girl’s side everyone got a performance record which is really amazing and definitely helped us advance to states.” Du said.

Partly responsible for the team’s success at the meet was their depth, with just 17 seconds seconds separating Jefferson’s fastest and 5th fastest runner.

“Our biggest strength as a team is that everyone has very similar speeds so we can all train together and run together in races.” Cross-country captain Tucker Stanley said. “We look forward to a great states performance.”

For the senior runners, the accomplishment was the culmination of years of practice and effort.

“We haven’t made states since my freshman year, so the coaches and everybody on the team is excited and can’t wait to represent TJ.” Stanley said. “We have all been working really hard this season, and we have a really deep team full of seniors. Our top seven runners that compete consist of five seniors, and we have all been developing as the years go on, getting ready for a great senior year performance”