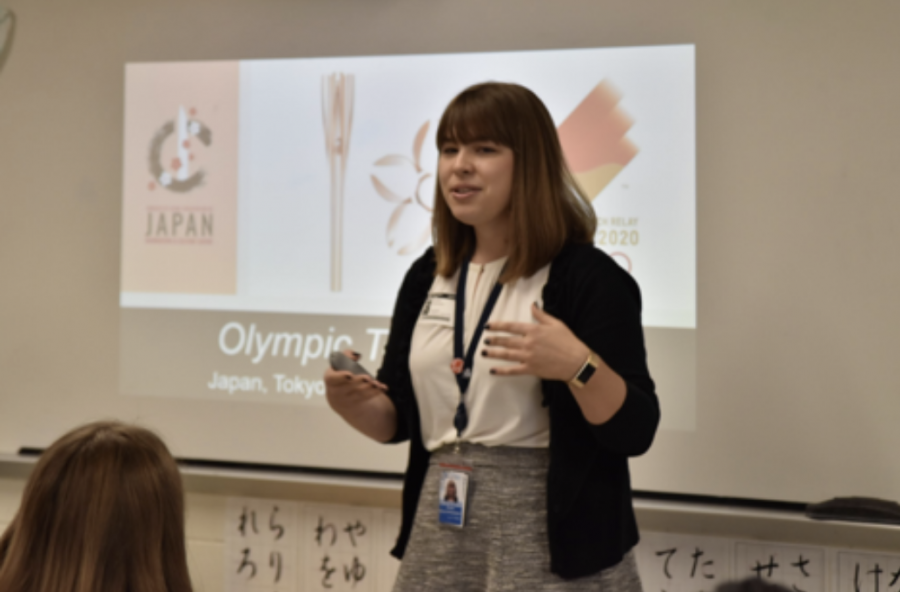 Representative Melinda Marquardt introduces herself and the history behind Tokyo’s plans for the 2020 Olympic Games. “The Embassy contacted us first,” Japanese Teacher Koji Otani explains. “They wanted us to promote the Tokyo Olympics.”

Japanese Ambassador Yusuke Sato and Japanese Cultural Center Representative Melinda Marquardt visited Jefferson during eighth period on Wednesday, Oct. 30. Students were able to sign up for A block to view a presentation about the upcoming Tokyo Olympics’ actions towards making the games more eco-friendly. Furthermore, the representatives brought an Olympic Torch that may be used in the actual games – students could both view and take pictures with this at the end of the period. Marquardt contacted Japanese Teacher Koji Otani to promote the Olympics among schools.

“It’s a big year for Japan to have the Olympics,” Otani said. “It’s probably because of that that they contacted me.”

Otani hoped that students would take something away from this event.

“It’s spreading the word about this event to the wide public,” Otani said. “And also, the story of how it’s made. The construction materials are from temporary shelters which were affected and displaced by the 2011 tsunami and earthquake disaster in Japan.”

The sign-ups for this event filled up rather quickly, as students were particularly intrigued by the idea of being able to see the Olympic Torch in person. Junior Kashika Dhanjal, for example, found it to be a unique experience.

“I wanted to go because seeing the Olympic torch up close and personal isn’t an experience that you usually get,” Dhanjal said. “So that was pretty cool.”

Besides simply showcasing the torch, the representatives also gave a short interactive lesson on Japanese history and Tokyo’s population, and how this was tied into the torch itself.

“The most interesting part was definitely all the history surrounding cherry blossoms and how they actually incorporated that into the torch,” Dhanjal said. “Also, the part where they talked about how they’re trying to make the Olympics in Tokyo eco-friendly using some really innovative ways was cool.”

These “innovative ways” include using recycled materials to build the stadiums. An example that the presenters used was the recycling of an old phone into materials. Alongside innovative building, the 2020 Games will also be featuring new sports, such as skateboarding and surfing, and possibly even karate.

“It was definitely fun,” Dhanjal said. “The people from the Japanese embassy and the cultural program tried to make it as interactive as possible.”