Seven teams from Jefferson competed in the event, kicking off the Certamen season 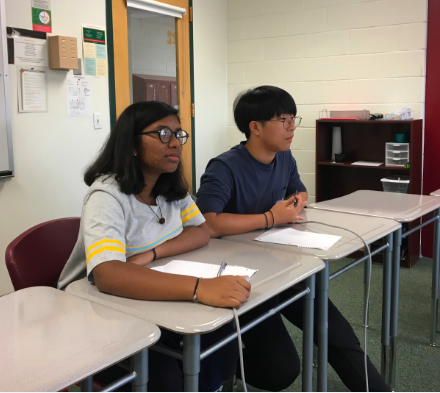 Freshmen Shriya Muthukumar and Matthew Kim, ready to answer the questions, listen to the question the moderator is asking during the preliminary round of the kickoff. “It was great since despite the fact we only got two people on the team, we still got third place,” Kim said.

Certamen is a quiz-bowl styled competition with questions that specifically focus on Latin grammar, Roman history, and mythology.

“It was a rewarding experience because we had tried really hard for the first couple of rounds and I was also really proud of our team because it was the first time we had done it,” Fisher said.

Joining the returning members of the Latin Certamen Team at the kickoff, ten new freshmen members have competed in the kickoff and have enjoyed the experience.

“My favorite part was when we pulled forward and finally took second place after we were tied for third,” freshman member Dhanbee Suh said. “It was a very exhilarating experience overall.”