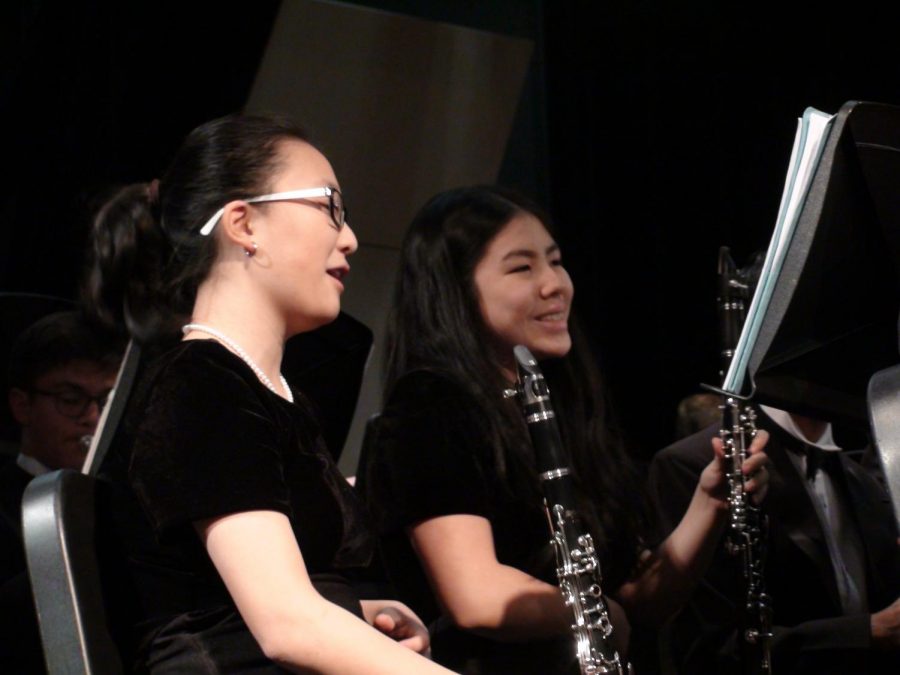 Laughing with her friend, freshmen and clarinet player, Mira Kim, enjoys her first high school band concert as part of the Symphonic Wind Ensemble. She performed at the fall concert on Oct. 23 at Jefferson. “Band is a significant part of how I handle my stress at TJ. I take band as a way to relax, rejuvenate, [and] just play music,” Kim said.

After months of practice, Jefferson performed their first band concert of the year. For the freshman coming in this year, this is their first concert in their high school career.

Mira Kim, a freshman in the Symphonic Wind Ensemble (SWE), said, “When we play together, the atmosphere that we created was so great. When you come and play something together something really magical is created out of that, and I thought that was such a beautiful thing.”

This concert included a series of pieces ranging in the style of music and the techniques required. In addition, many of the pieces had an underlying meaning. The second song played by SWE was one representing the views of many teachers. The soft and slow start transitioning with a crescendo into a staccato and lively section conveys a student finding his/her voice for the first time. This song was conducted by guest conductor Mary Aldmon who worked as the band director at Jefferson for nine years before Mr. Foreman.

“My favorite song was probably To Create A Voice, and it was intended to…show the journey of kids learning their instrument, and finding their voice,” senior Yash Jha said. “Mr. Foreman will usually put people in front of us that he can trust, so it was actually really chill, and Mrs. Alrid she knows the TJ environment and culture.”

The Symphonic Wind Ensemble will go on to play these songs at the VMEA Featured Performance on Tuesday, Nov. 21.

“They’re being featured as one of the two high school bands that are playing a conference for all the other music educators as an example of what the top bands are supposed to sound like in the state… only a couple high schools a year get in,” Band Director Adam Foreman said.

Students have put in much time and dedication into the success of this concert and the upcoming state convention.

“I don’t think I was prepared for how much work they put in outside of rehearsal…and they care about each other as well,” Foreman said. “I just encourage people to come out and support these groups.”