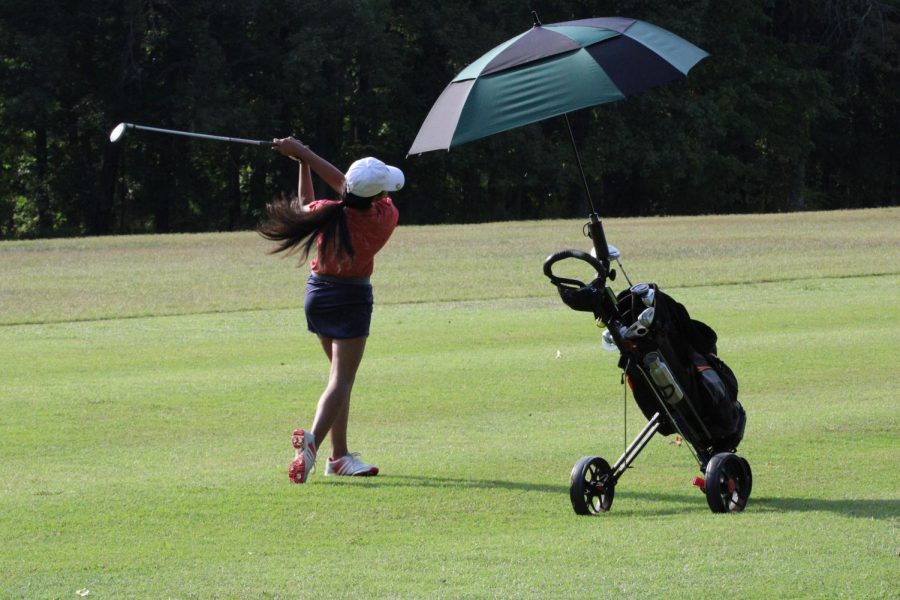 Senior Khushi Chawla swings her golf club, sending her ball flying on the green. To prepare for regionals, Chawla practiced twice on the course where regionals would be held (Laurel Hill Golf Club). "I mostly focused on the weaker aspects of my game, including putting, bunker shots and shots out of the rough," Chawla said.

Jefferson’s girls golf team competed in VHSL golf regionals at Laurel Hill Golf Club on Wednesday, Oct. 23. Golfers qualified for the tournament by getting below a threshold score of 45 either in an official match or in one of three qualifiers. Three members of Jefferson’s girls golf team–senior Khushi Chawla, senior Sarah Gu, and sophomore Catherine Nguyen–qualified. However, only Chawla, who qualified through playing a co-ed official match with members of the boys golf team, was able to go to the tournament.

Although scores from regionals have not been released yet, Chawla reflects on her overall performance at the tournament.

“There were some aspects of the game that I think I did really well in and others that definitely need more work,” Chawla said. “I was really happy with how well I was hitting my driver shots, especially because at this time last year the driver was the club I was the most uncomfortable with.”

Chawla considers the tournament a good wrap-up to her high school golf career, specifically citing a moment in the game that she felt was memorable.

“On the green of the last holes I surprised myself by getting the ball in the hole with one stroke, something that normally takes me two or three strokes,” Chawla said. “It was a really great way for me to end my last game playing on the high school team.”