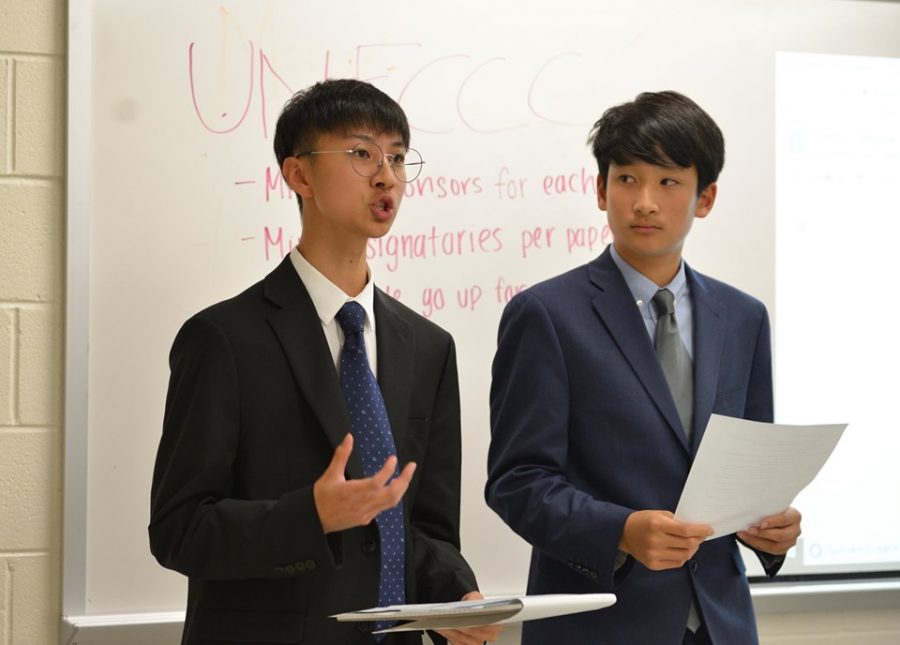 For the mock, each novice had a partner, which formed one delegation. There were 46 delegations in total, which were then equally split into two committees, the United Nations Framework Convention on Climate Change (UNFCCC) and the United Nations High Commissioner for Refugees (UNHCR), who discussed renewable energy and the economic integration of refugees, respectively. Each novice with their partner received a certain country to represent. They had been preparing rigorously for the mock for around a week, researching facts about their countries while coming up with solutions on their specified topic.

“I used the help of my MUNtor [a more experienced upperclassman who has participated in TJ MUN before], special thanks to them. We [my partner and I] did a lot of research and compiled it into one document, and for the opening speech we typed it all up and essentially memorized the basis of it,” said freshman Yashna Hasija.

During the mock, the novices each presented their solutions to the topic they were presented with if called upon by the chair, working toward the end goal of creating a passing working paper, a series of solutions presented to the committee. Working papers consisted of various clauses (broad solutions to the problem given), which had subpoints that were generally more specific. Each committee had four working papers that were created by blocks, groups consisting of multiple delegations that shared similar viewpoints. The mock required people to step out of their comfort zones, and present their working papers in front of their committee in a diplomatic way.

“I felt kind of nervous, but it was an interesting experience because I was just listening to other people talk. I also had to present a few times, which involved working with other people. It was fun because we were sharing our ideas with each other,” said freshman Sanya Gupta.

In the end, one working paper from UNHCR and two from UNFCCC were passed. Each paper required a two-thirds majority vote from the delegations present. Novices had various views regarding the mock, but many of them had a related perspective.

“The fall mock was well coordinated, although it felt rushed at times. Whereas other conferences usually afforded delegates many opportunities to talk, the mock, with its combination of low time availability and a high number of delegates, did not, which seemed to have made it harder for the MUN administration to gauge delegates’ abilities,” freshman Lucas Ribiero, who has participated in MUN before, said.

For several novices with no prior experience with MUN, however, they felt that MUN provided a strong community and sense of belonging.

“[Doing MUN] has been probably one of the best decisions that I’ve made since coming here to TJ,” freshman William Gutiérrez said. “It’s been so much fun.”