An explosion of two worlds 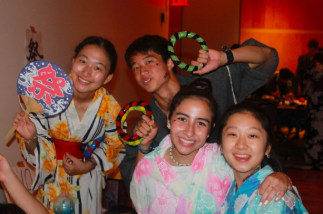 One week. Two countries. 80 high school students at Princeton University, half of whom traveled oceans and half of which traveled across the country, live together on campus. The High School Diplomats (HSD) program fosters a Japanese and American cultural exchange experience for ten days over the summer. These students establish relationships while attending seminars and events intended for them to share their backgrounds and stories. This past summer, several Jefferson students attended the program.

“I heard about it from other students who had done it before that also go to TJ,” senior Evan Williams said. “So, mainly people in the class of 2019.”

While Jefferson has a Japanese language program that hosts Japanese exchange students annually, HSD provides an additional opportunity for education and growth that is open to all sophomores and juniors. After submitting an extensive application that includes a letter of recommendation and a creative work, admitted applicants first host a Japanese student the weekend before the camp and then live with a Japanese roommate during the session.

“There are different theme days like Independence Day, which is American themed, and a Japanese culture day,” Williams said. “[as well as] Thanksgiving, Halloween, and the Olympics. There are just lots of cool different activities and ways to engage with each other’s culture. Intermixed with that are more formal presentations on education, military, global issues, and things that you’d expect to see in a humanities-oriented program.”

This wide range of activities allows each student to explore and gain unique experiences, knowledge, and values. While Williams gained a newfound respect for the Japanese students in the high-pressure environment they must thrive in, fellow senior Mia Yang was able to reconnect to her Japanese heritage.

“You learn about the other culture on a really personal level,” Yang said. “I was placed in a Japanese seminar class, and we had to speak in the other language the entire time. We discussed a lot of different topics like globalization, climate change, and other social issues. It was really interesting to … [gain] a Japanese perspective versus an American perspective.”

HSD can offer something to students like Yang, who may already be familiar with Japanese culture, as well as students like junior Vikram Raghu, who went into the program without any Japanese background. He recalled the experience being described as “the best ten days of your life.” Among the cultural events and language classes included specific reflection times that allowed students to think about what they were learning.

“[The program] put me in a place [where I could] figure out where I was, and it helped me on the path to figuring out how I could improve myself and become a better person,” Raghu said. “I learned the importance of relationships … and after the program [I realized] I took certain people for granted and was putting myself in places where I shouldn’t have been putting myself in order to help certain relationships.”

Learning about Japanese culture and language was certainly one of the larger benefits of the program. However, the aspect that Jefferson students seemed to value the most was their relationships, as Williams, Yang, and Raghu still keep in touch with the Japanese and American friends they made at the camp.

“Everyone there came trying to get something out of the program,” Raghu said. “I realized that I didn’t know as much about my own culture coming from India.  Since then, I take advantage of the fact that my grandparents have been staying with me. [It’s important to me that I] more actively participate in all the ceremonies, just so I can get a better perspective and learn about where I come from.”

The second part of this program is HSD Japan, where 20 of the original 40 American students are given the opportunity to spend three weeks in Japan. They tour Japanese cities, participate in a three-day homestay, and attend a similar program in Kyoto.

“I’ve stayed in touch with all the close friends that I made there which has been really, really great,” Yang said. “Not just in the Virginia area, but people in Texas, California, Osaka, Tokyo. The experience gave me a better perspective of a global community. Even though there were language barriers and other difficulties, it was really heartening to see American students and Japanese students forming such close bonds in only 10 days.”