Capturing the essence of lonesome regret: Harry Styles’ “Lights Up” 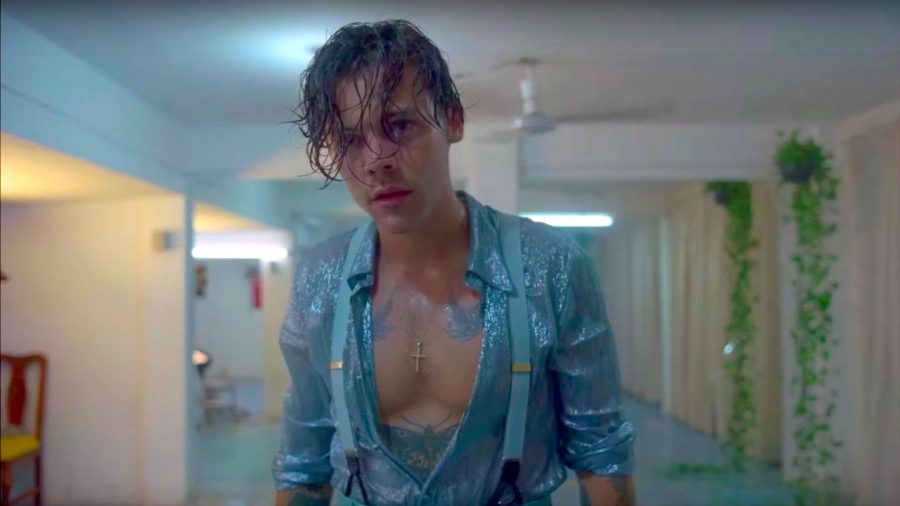 Image courtesy of MTV. Dressed in pastel blue, Styles stares blankly into the distance, entirely drenched under swaying, flickering lights, in the "Lights Up" music video.

It’s been two long years since Harry Styles’ self-titular solo debut album, which marked not only a distinct departure from his boppy, boyband-ish composure, but also a distinctly new era of maturity for the singer. This reinvention of self was received warmly: Harry Styles set chart-topping new records and sold over a million copies globally, debuting on the #1 spot of the UK Albums chart and reaching the place of 9th most sold album of the year. But despite his impressive breakout, beyond an admittedly enigmatic social media presence – including a recent viral tweet of his simply stating “Do.” – Styles has been entirely radio silent these past two years about new projects in the works.

Yet, out of the blue on a seemingly arbitrary Friday night, Styles dropped his latest single, enigmatically, much to his style, entitled “Lights Up.” Several starkly lucid images from the accompanying video were posted – “LIGHTS UP. Out now.” – and his social media went silent once more.

Introduced by a set of nostalgia-inducing synths and a serene guitar strumming, “Lights Up” feels… almost lonely in a bare-bones way not often seen from his previous efforts. Harry Styles was known for a heady mixture luster and rock, brimming with effort and gusto. But “Lights Up” feels melancholic and dreamy, tinged with regret, once again breaking out of the boundaries he set for himself. That destitute sentiment is especially exaggerated in the lyrics, such as the common refrain “Do you know you are?” and the angelic runs of “La di da da da.” There’s a soft bass in the background, gentle and sweet, almost centering the focus of his lilting voice. “It’d be so sweet/If things just stayed the same,” he murmurs softly, both melodic and ambiguous in his fashion. Masterfully evoking that singular emotion of loneliness and remorse, all these parts collectively conjure up almost an experience of sorts as Styles’ raw voice screams “I’m never going back.”

Beyond the break in style, “Lights Up” also brings to the dining table a break in structure. At times the switch between verses seems almost abrupt; the chorus is difficult to identify and there doesn’t appear to be some consistent, rule-adhering framework underlying it all. But a lack of clarity doesn’t manage to detract from its appeal; instead, it adds, layering the nuance of its feeling of sorrow. It feels strange and yet distinctly right, as if the abnormality truly underlies the anguish and loss he vaguely expresses. In that way, it’s clear that Styles has created a masterpiece of emotional expression.

The lustrous, neon imagery of the corresponding music video only adds to its melancholic and remorseful feel. The visuals are artistry by themselves – Styles surrounded by crowds of glistening men and women bathed in green light, or dressed in pastel blue under flickering lights. Red light illuminates his body as he sways on the back of a motorcycle in the dark. It is a perfect rendition of that emotion rendered by the song’s production: a sorrowful quiet that permeates each scene.

Many fans have found a separate hidden meaning within the release – Styles’ own coming out. Perhaps the most obvious of the evidence gathered was the release date on National Coming Out Day. Others have commented on the fairly unsubtle common tones of reds, blues, and purples, as well as his playfulness with men, spread throughout the video, leading to predictions of their own. While by no means official, it gives fans something to stew over before the next (and hopefully not far off) release of Harry Styles.