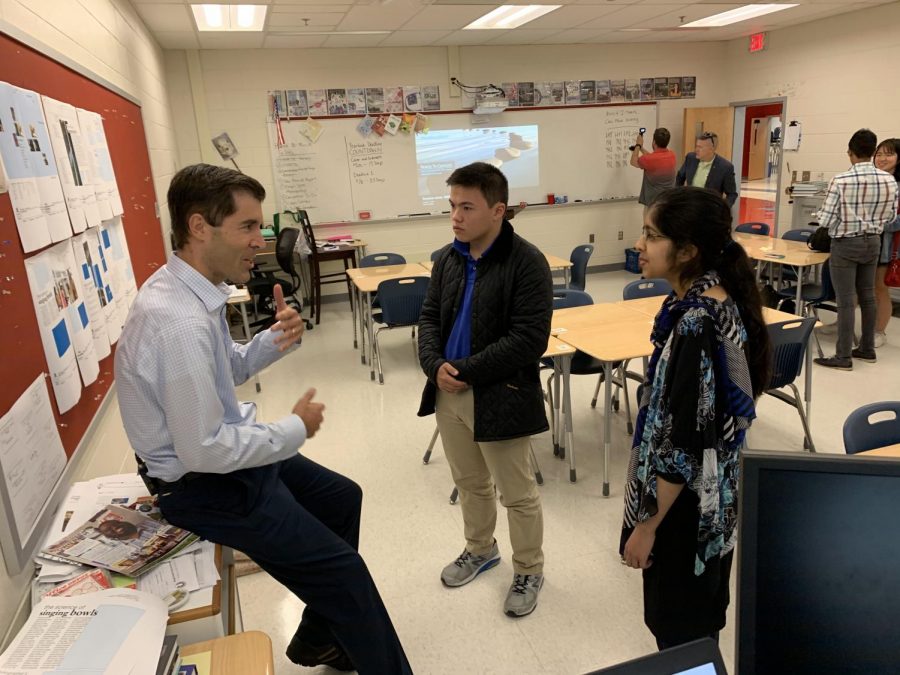 NBC News4 I-Team Investigative Reporter Scott MacFarlane, along with Senior Investigative Platform Manager Rick Yarborough and photographer Jeff Piper, visited Jefferson’s Journalism class during 5th period on Monday, Oct. 7. MacFarlane conducted a survey on how many times a student received notifications on their phones during 5th period, and gave a brief lesson on the importance of reviewing one’s work multiple times in journalism.

Initially, MacFarlane and his team decided to investigate student cell phone distractions while they were producing a report earlier this fall regarding teacher retirements.

“We surveyed thousands of local teachers to ask why they might consider leaving the field of education. We were quite surprised by the number of teachers who had responded to our survey by citing their frustrations with student cellphone distractions,” MacFarlane said. “The advent and increase in student cellphone use has made life challenging for teachers. Students are more distracted and can be more difficult to educate in this era of cellphone distraction.”

As a result, MacFarlane and his team sought to determine how many times a student receives cellphone notifications during a class period.

“We learned quite a bit from watching how it occurred during Ms. Harris’ class. Our report airs in mid-November and we’re very excited about it,” MacFarlane said.

For the students, many were excited for the visit and enjoyed not only participating in the survey, but also learning how to improve their journalistic skills.

“I thought it was really cool that a professional journalist is coming here because I think it has that wow factor, since he’s on TV everyday. I was just kind of waiting to see what would happen; it [the visit] was pretty great,” senior Sid Ram said.

In the lesson, MacFarlane taught students the importance of teamwork in producing effective articles, through discussing real-world examples of comical mistakes.

“The beauty of being a journalist is that no two days are the same. There truly is no ‘typical workday’, which is both exciting and tiring. Some days I’m in the US Capitol, tracking down Members of Congress for interviews about laws and scandals,” MacFarlane said. “The joy and attraction of journalism is that it’s not at all predictable. You never know what tomorrow is going to bring.”