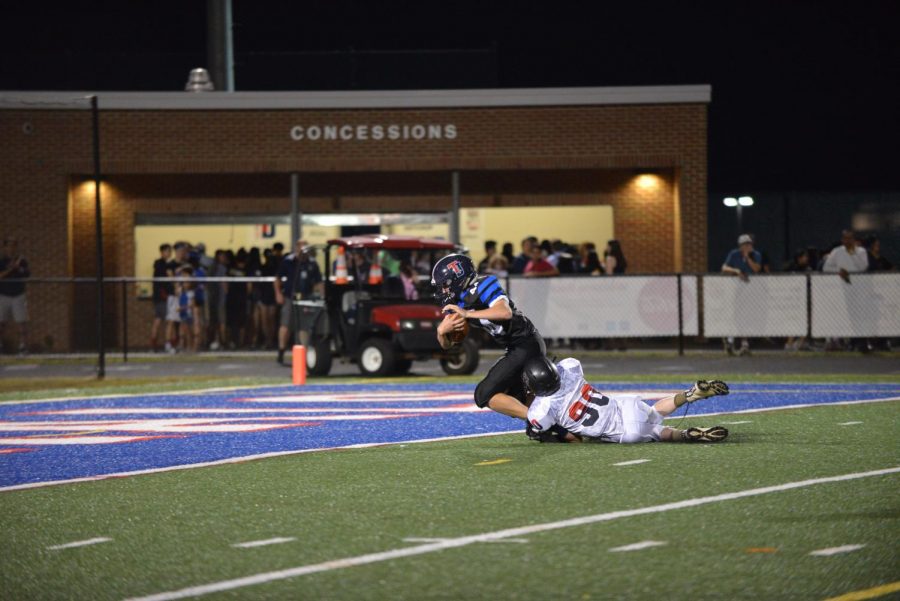 The Jefferson varsity football team triumphed over the Hampton Road Generals 42-0 on Friday, September 27 in the 2019 Homecoming game.

The Colonials set the pace early, and on their first offensive play, scored a touchdown with a 54 yard jet sweep by running back Sherzoy Jan (10). The touchdown and succeeding extra point brought the score to 7-0.

From there, the Colonials continued to pile up the points, and with touchdowns by wide receiver Neel Mandapati (21), tight end Caden Philips (44) and quarterback Sihun Kim (11), the Colonials ended the second half up 28-0.

After an offensive stalemate for the majority of the third quarter, Jan increased the team’s lead to 35 with an eighteen yard rush into the end zone.

The final touchdown of the game came with a reception by fullback Charles Son (53) to bring the final score to 42-0. Both Son and backup quarterback Subareesh Sundarraj (16) registered their first touchdowns as Colonials on that play.

“There was no one around me and a good throw by [Sundarraj] led to an easy touchdown,” Son said.

On defense, the Colonials shut down the Generals, consistently forcing turnovers and making tackles for loss (TFL). On the game, the Colonials recorded 1 forced fumble, 1 interception, 5 sacks, and 7 TFLs.

“While we had some mistakes here and there, overall, everyone did their jobs well and the scoreboard shows it,” left guard/defensive nose tackle and varsity captain Matthew Saenz (50) said.

The Colonials were cheered on by stands packed with fans, who ended a contentious Homecoming week united in their support for Jefferson’s football team.

“As a senior, when I came into my freshman year our team wasn’t winning that much and we were just losing game after game after game,” senior Jae Canneti said. “Then the next years after that, we started slowly coming back and winning more and more games. By this year, it was our third year of winning hoco, so it felt like the cap on the three years. We went from barely winning to winning more and this time we shutout the other team. It’s nice seeing TJ progress as a team.”

With the resounding win, the Colonials move to 3-2, and with 3 games left to play, have already surpassed their win total from last season.

“I thought that was a nice blowout. In the past TJ used to get blown out but this year we switched that up on everybody,” Jan said. “You all [were] sleeping on TJ. Ain’t no one sleeping on TJ no more.”