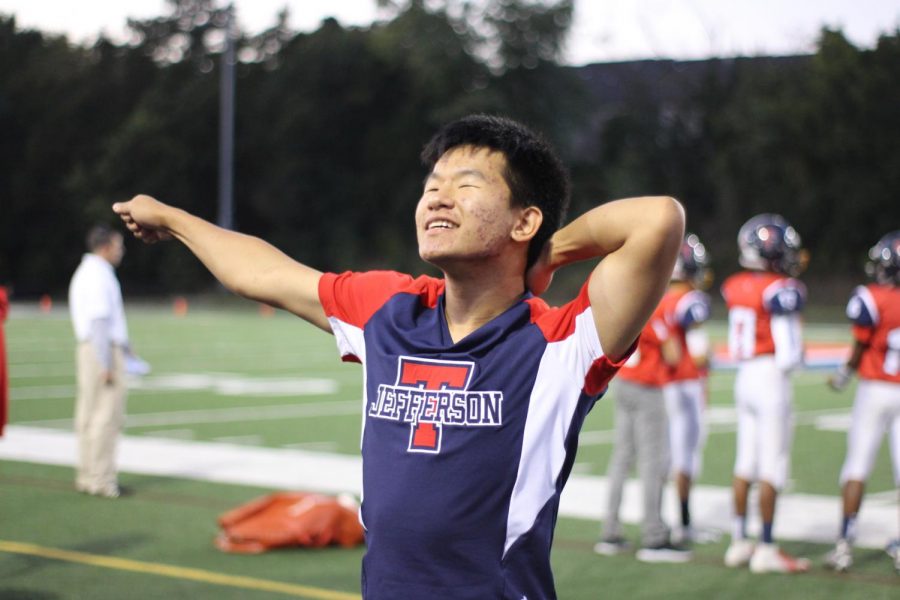 Justin Choi smiles while hitting a motion in a cheer. "Cheer is a really rigorous sport, so sometimes you feel completely exhausted, but I always leave feeling happy and excited," Choi said.

The loud yell comes from the cheerleaders on the sidelines, galvanizing the crowd in the stands as the Jefferson football team completes a pass. Along the line of mainly female cheerleaders, three males stand out: juniors Justin Choi, Matthew Hwang, and Sean Nguyen, who wear big smiles on their faces as they cheer into their megaphones.

Junior and varsity cheer captain Jenalyn Dizon convinced her male friends to join cheer during her sophomore year because she knew the important role that boys played on the team.

“The three guys that we had on cheer were seniors and we knew that they were leaving next year,” Dizon said. “Guys bring different skill-sets to the team, especially for tumbling and stunting.”

Although unwilling at first, Choi, Hwang, and Nguyen, convinced by Dizon, decided to join cheer their sophomore year even though they had little experience.

“Even though I initially thought I would never do it, I found myself at tryouts a week later,” Choi said. “I’d always wanted to get involved in sports, and I loved the energy that cheer had.”

Coming with little to no experience initially proved to be a difficult hurdle.

“I joined midway through the season so there was a lot to get caught up with,” Choi said. “Most people think that cheer is really easy, and that’s definitely the mindset I had going into it too, but the seemingly infinite number of sideline cheers and raw strength required to do stunts took my breath away.”

Hwang echoes this sentiment, adding his own perspective.

“It was very difficult, as I needed to stretch a lot to increase my flexibility. You need to learn different ways of using your body to move and all that,” Hwang said. “And it was hard to adjust socially [to the team] too at first, but it’s gotten better.”

In addition to challenges faced on the team, the boys also initially experienced judgement from their peers.

“There’s an obvious stereotype when people find out you’re a guy doing cheer, but most people eventually get over the shock and find it really cool,” Choi said. “I think one of the best things about doing cheer is breaking the stigma surrounding locked genders for the sport.”

Everyone on the cheer team has a specific, equally important role, and the boys proved to be no exception.

“Even though there’s a heavy imbalance for genders on cheer, everyone generally ends up with similar roles. If there’s something that doesn’t look like it’s going to work for us such as a specific dance move or motion, we’ll adapt it to fit,” Choi said. “Sometimes we have more of a burden since we’re guys, but other times we get to lay low and just be supporting everyone else.”

Hwang notes some of the specific differences between what is expected of the guys and girls on cheer.

“One difference is what type of cheers we do; guys do not do some of the more hip-movement based cheers,” Hwang said. “Instead we use the megaphones in order to amplify [our] voices.”

Despite these differences, senior and varsity co-captain Yeonwoo Kim emphasizes that male cheerleaders are important both to the success and safety of the team due to the intense nature of the sport.

“Having guys on the team is really important because cheer is not just a girl sport; it is a coed sport,” Kim said. “We’re not just cheering and dancing around; it’s an intense sport where people actually do get hurt. And because people get hurt, it’s important to have stronger guys on the team.”

Although cheer takes hours of practice and dedication, Choi believes that it has helped him with skills outside of practice as well.

“Cheer has actually made me a lot better at dealing with my difficulties. Because we get home so late, I have to make efficient use of my time, and there’s really no time to procrastinate,” Choi said. “If you’re ever feeling down or are having a problem with something, you always have people after school to talk to, so cheer has actually helped solve more problems than it has created.”

Junior and varsity cheer athlete Molly Barron believes that the boys are not only helpful to the team physically but emotionally as well.

“When things are tense or like not going well, the guys always find a way to lighten the mood by encouraging everybody and cheering us up,” Barron said. “Sometimes we are down on ourselves, but [the boys] bring more cheer to cheer.”