Students from RANEPA come to Jefferson for a cooperative research project between the two schools. 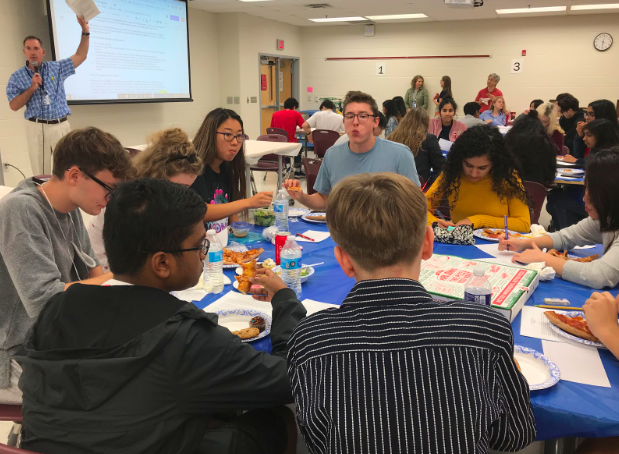 Seventeen students and five teachers arrived from the Russian Presidential Academy of National Economy and Public Administration (RANEPA) as part of the first TJ-RANEPA research collaboration between the schools on Monday, Sept. 16. The students are staying with Jefferson students until they return to Moscow on Sept. 30.

The partnership between Jefferson and RANEPA began when RANEPA contacted the American Councils for International Education to assist in finding a school that could host a collaborative research project. Knowing that Jefferson had a Russian program for students, the American Councils for International Education reached out to the Russian teacher Betsy Sandstrom. Faculty sponsors Monte Bourjaily, Malhaz Jibladze, Jonathan Osborne and Sandstrom contacted RANEPA and began to plan details for the rest of the program.

“We saw this as a great idea that complements what we do here at TJ, which is to try to help students engage in authentic research projects to take their skills learned in classes and apply them in real-world situations,” Bourjaily said.

After settling in to the Jefferson environment, the exchange students are finding differences in how Jefferson and RANEPA are run.

“The school is really big. Also, you stay in school all day, and you can’t just go out and get coffee during your breaks,” RANEPA student Vladislava Popova said.

Along with the program being a new experience for the exchange students and teachers, the Jefferson students involved also have the opportunity to conduct research and meet people from across the globe.

“I’m friends with some of the Russian club officers and they needed another host student. Finding out about the research opportunity was an excellent bonus,” Host student Emily Worden said.

All in all, students and faculty from both groups believe this partnership between Jefferson and RANEPA has so far proven to be successful, and are hopeful that it will continue for years to come.

“The students have so many more opportunities for education,” Pivovarova said.