In the face of adversity, two Jefferson students powered through to develop, promote, and publish their app, BizCity, over a week long competition in South Korea 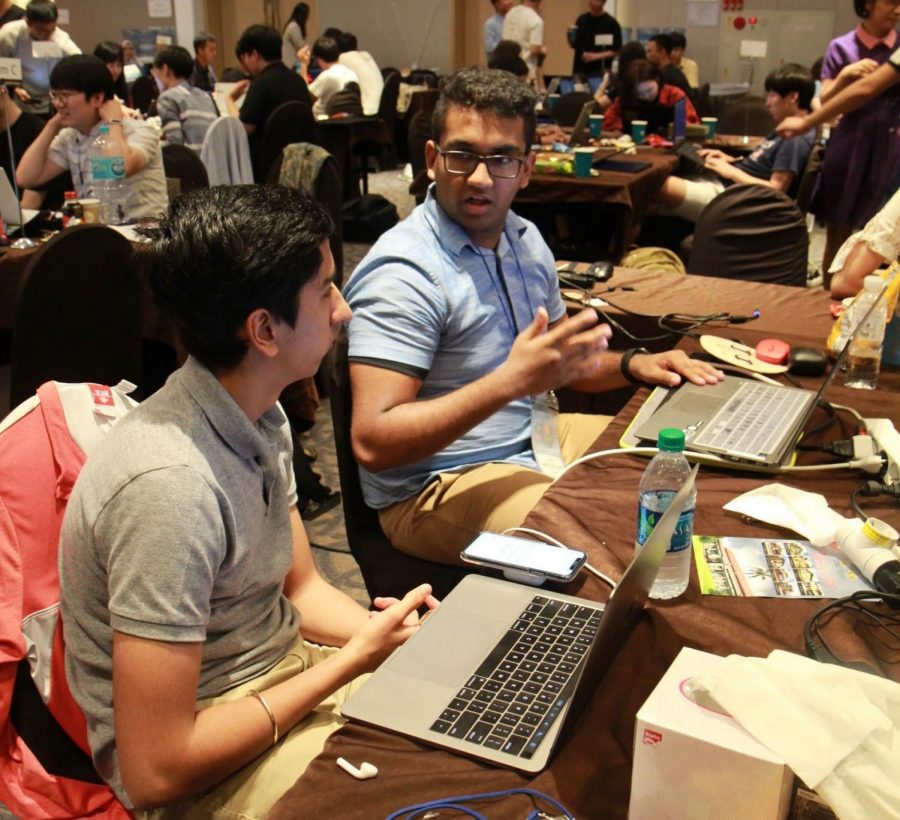 Deep in thought, Wadhwa and Chigurupathi discuss possible pathways while developing their app.

When it comes to developing an app in a foreign country with few guidelines and teammates who speak little of your language, seniors Parthiv Chigurupati and Pranav Wadhwa are experts.

On Aug. 17, Chigurupati and Wadhwa traveled, along with teacher representative Dr. Peter Gabor, to Busan, South Korea, for the e-ICON World Contest, where they worked to develop a competitive mobile application as part of a multicultural team.

“We had one week to build an Android app that was supposed to be an educational app that helps target the United Nations Sustainability Goals,” Wadhwa said.

In order to well-represent the United States, Chigurupati and Wadhwa were handpicked by Jefferson’s computer science staff.

“We got together in a little conference and we decided who would be the best representatives for TJ, both from a programming point of view and from an ambassadorial point of view,” Gabor said.

At the competition, Chigurupati and Wadhwa were paired with two Korean students. However, their teammates’ lack of technical experience and English fluency, as well as Wadhwa and Chigurupati’s lack of Korean fluency, immediately posed a challenge.

“Not only did they not have any coding experience, but they were also freshmen at their school, and they didn’t really have any experience with business or any of the economic base points we were using in our app,” Chigurupati said.

Faced with these challenges, Chigurpupati and Wadhwa adapted throughout the week.

“When we got there, we thought, ‘This is what they’re gonna do,’ but we kept getting new curveballs. It became harder to stick to our plan, or even create new plans, just because the solution didn’t always seem like it existed. We thought we had done enough planning,” Chigurupati said.

“Essentially, it’s an app that helps [them] learn how to make business decisions; these decisions help them develop a business that not only benefits the company’s growth but also their employees, their environment, their resources, etc,” Wadhwa said. “It’s not possible to improve every single thing at once, so you have to make some sacrifices.”

In addition to the app itself, teams were required to make a promotional video. Chigurupati and Wadhwa thought that their teammates knew how to video edit, but this was not the case.

“Pranav and I had to sit down together alone and say, ‘alright, what do we do? How do we make them feel like their time has been spent in a worthwhile way?’” Chigurupati said.

Along with issues surrounding language and varying skill levels, Jefferson representatives faced difficulties pertaining to the structure of the competition.

“I think the goal of the competition is pretty admirable because it’s just trying to bring people together, and I respect that,” Chigurupati said. “In America, when you go to a hackathon, everything is well defined. You know exactly what’s going to happen when and where, what the goal is, what the plans are. But when we went there, all we knew was that we had to develop an app.”

Ultimately, despite more obstacles than expected, the team not only placed third, but will also have their app published.

“It was a great experience, not only just because we got third place, but we definitely learned a lot considering neither of us were specialized Android developers,” Wadhwa said. “To come together with little help from our teammates and do that all on our own was a really great learning experience. It was really fun, just heading out to Korea for that.”