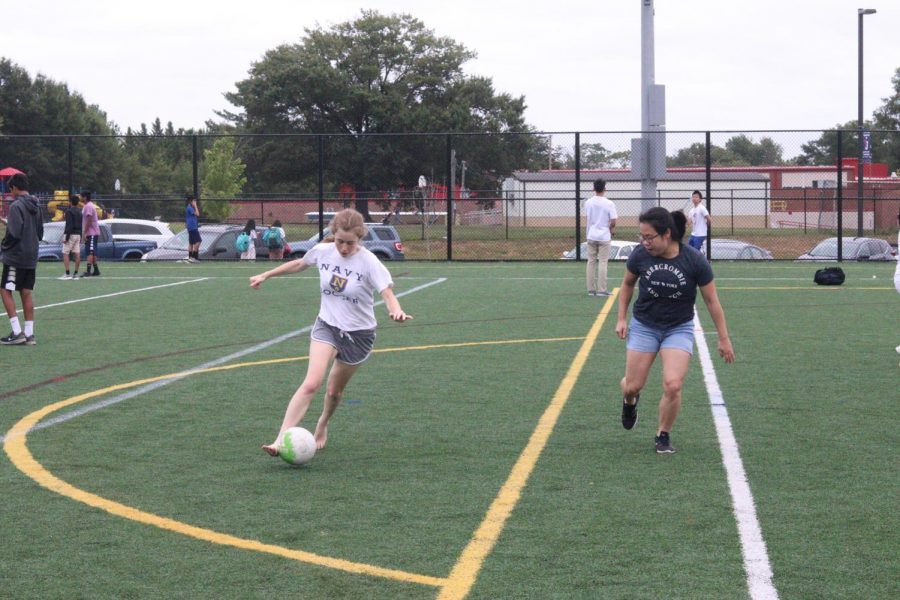 Shea Weingold kicks a soccer ball and Jenny Li waits for the ball to come her way. Students played soccer, volleyball, and tug of war during the Bash. Spending fun time with friends after a stressful week is one of the largest reasons students decided to attend the Bash.

The 11th Annual Back to School Bash features bouncy castles, music, food and school spirit. The Bash was held on Friday, Sept.13 for staff, students and their families to come together and get to know each other. The Parent-Teacher-Student Association (PTSA), Student Government Association (SGA), and the Office of Student Activities, came together to organize the after-school event, which began at 4:30 p.m.

Senior and SGA President Ronith Ranjan has attended the Back to School Bash every year since he began high school and assisted the Office of Student Activities in planning the event this year.

“The Back to School Bash is a great time for freshmen to come to school, stay afterward, hang out with friends, and get to see the different perspectives of TJ. There’s a TJ where we are academically focused and intellectually driven but we also came for the sports,” Ronith said.

One of the PTSA’s missions for the year is to relieve stress for students and make their time at TJ as enjoyable as possible. In fact, the intent for the bash lined up with the reasons students enjoy it.

“[My favorite part was] definitely the bouncy castles. I loved hanging out with my friends and the free food at the bash,” freshman Laasya Ravipati said.

Although the bouncy castles were often overtaken by younger children, most likely siblings of TJ students, the older kids seemed to enjoy the inflatable life-size foosball game and moon bounce race just as much.

“I liked the inflatable foosball game a lot. I enjoyed it because it was a twist on regular soccer,” freshman Neel Sharma said.

For some upperclassmen, going to the Back to School Bash is a tradition, or at least a memory with friends.

“The Back to School Bash has been such a fun part of my year since freshman year,” junior Jenny Abraham said. “Some of my best memories of TJ are from hanging out at the baseball field with my friends at the Bash.”