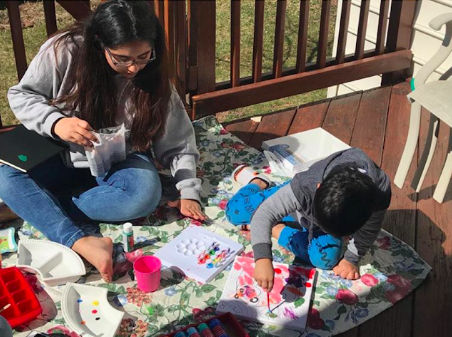 Photo courtesy of Manya Phutela. Chantilly High School freshman Manya Phutela paints with her brother on a sunny day. “[After leaving Jefferson], I get to hang out with my brother every day, which wasn’t possible at Jefferson, and it makes me so happy!” Phutela said.

Since its rebranding to a magnet school in 1985, Jefferson has built and maintained a reputation for stellar, yet grueling STEM-focused academics. Sometimes students find that they must drop non-STEM passions or adjust their schedule to keep up with graduation requirements, such as computer science and design and technology. When the pressure builds up so much that it affects students’ health, some opt to leave Jefferson’s environment altogether.

“I was just so tired all the time and really wasn’t feeling it, so I decided [leaving Jefferson] was best for me,” Chantilly High School freshman Manya Phutela said.

Whether in just a few weeks or after a few months, students who leave Jefferson all share a common reason: those students’ circumstances or passions don’t align with the school.

“Sometimes you might hear that in one year, 12 students might leave TJ. we know that five of them left because their families moved. Then maybe four others might have left because they had just some really different interests. There are students actually who will say that the school just didn’t meet their expectations. [The students] didn’t feel like they fit in,” Jefferson principal Dr. Ann Bonitatibus said.

Before Jefferson, prospective students and their parents often have high expectations of the school. Some students apply to Jefferson themselves or their parents force them to apply, thinking it will bring success later in life.

“I mainly attended [Jefferson] due to pressures I didn’t realize then, but are very clear now,” Helena Lu, a senior at Langley High School, said. “When I look back on it, I was pretty pressured by my parents who were both in the hard sciences. They really liked the idea of me being an engineer because they are both engineers. After I got in, they started researching more about the school, and they were like ‘Oh, if you go here, you can go to a really good college, and then you’ll get a really good job.’”

While the parent’s perspective might be more aligned with STEM, sometimes a prospective’s students interest doesn’t align with STEM even before the application process, which causes later problems.

“When I entered TJ, I was already a really humanities-focused student,” Lu said. “It was already pretty clear that it kind of wouldn’t work out in the beginning. What made me drop out was not being able to see myself at this school anymore. Because, you know how TJ has senior research labs, and these predetermined paths you have to go on. I looked at those and I was like, ‘I cannot see myself at any of these [research labs] happily.’ I would probably be struggling a lot with the coursework and just not satisfied with my place in life.”

The decision to leave Jefferson is one that students may have trouble deciding, especially after freshman year, when students are invested in one of Jefferson’s many programs such as theatre or marching band.

“I first thought about leaving my sophomore and junior year,” senior Kelci Mapili said. “[I stayed because] I already put so much work into color guard. My instructors were counting on me to be part of color guard because I’d been such a consistent member. I didn’t want to disappoint them by leaving, even though I was really struggling with managing pretty much everything else.”

In addition, since some newly-admitted Jefferson students also move closer to the school’s location, these students may be nervous about leaving Jefferson and having to socialize in a base high school with unfamiliar peers.

“I think the two factors that were keeping me [at Jefferson] were the Japanese program and the opportunities that came with it, and also my friends, because I didn’t know anyone from Langley. I had just recently moved from Centreville to the Great Falls area, so it wasn’t like I attended middle school with those people,” Lu said.

Though future plans are a key factor for parents sending their children to Jefferson, these plans are also why some students are uneasy about leaving Jefferson.

“I kind of had the impression that if I dropped out of TJ, I would fail at life. It was kind of like nothing in my life had been so much of an achievement before [getting admitted into TJ], so I was like, ‘Okay, if I do anything, I’m going to graduate from TJ,’” Lu said.

“I realized I would rather be a ‘big fish in a small pond,’” Phutela said. “So I watched this video about if your college or high school matters when I was younger, and while I was at TJ, that’s all I really thought about. Not gonna lie; I went to TJ for those college acceptances, but I realized I wasn’t going to go to any college if my GPA sucked.”

Like other changes in life, the transition from Jefferson to a base high school may be somewhat shaky at the start. In Lu’s case, since she moved closer to Jefferson after middle school, she knew no one from Langley when transferring to there.

“It was really rough for the first few months. I transferred in the middle of the year so it was really jarring to go from this 70% Asian high school to a really white high school. Just the atmosphere was really different,” Lu said.

For those who did not move closer to Jefferson, transitioning may be slightly easier because there are middle school friends at their base high school.

“There wasn’t a lot of work to catch up on, but the harder part was friends and stuff. I knew people from middle school, so it wasn’t that bad,” Phutela said.

After the transition, though, Phutela and Lu’s lives have improved. Since they do not have to stress over classes as much, they have made space for greater involvement in hobbies and extracurricular activities. With a healthier state and a happier mind, these students are content with the way their lives are headed.

“I actually have time for myself now, and I’ve been learning things like CS and Punjabi that I just didn’t have time for at TJ,” Phutela said.

“I wouldn’t say that I have no regrets,” Lu said. “I mean, whenever you make such a big leap from place to place, you’re going to feel a little doubtful. In general, I don’t regret it, and I try not to because I can’t do anything about it anyways.”