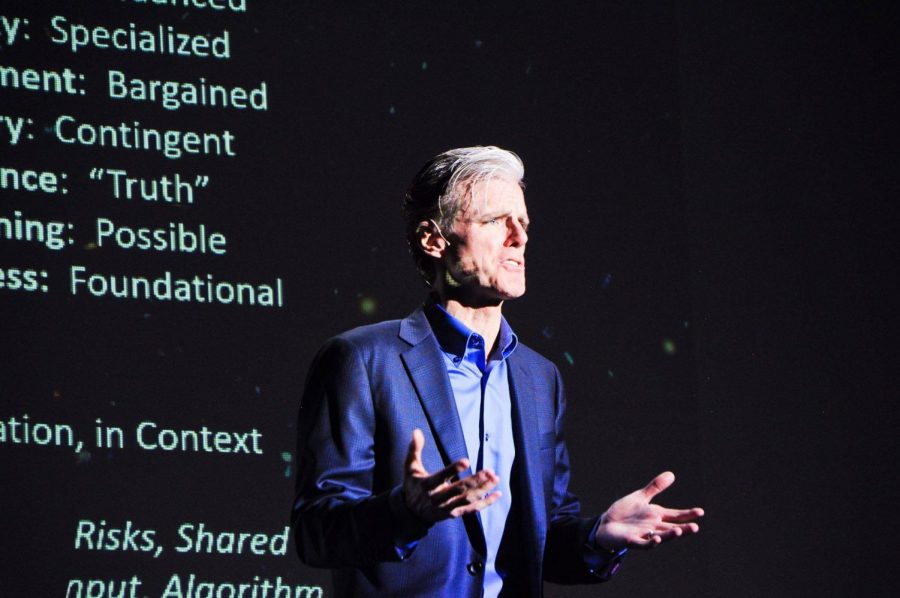 The 2019 tjSTAR was held from May 28-29. While many aspects of tjSTAR changed this year, something that remained constant was the keynote speaker. During eighth period on May 29, Paul Misener, Vice President for Global Innovation Policy and Communications at Amazon, spoke to Jefferson as the keynote speaker.

Hitting its eleventh anniversary, tjSTAR opened up a new decade of its existence with a new look. In response to falling student attendance, tjSTAR experienced a complete overhaul. Rather than allow complete student choice throughout the day, students went to humanities classes as usual and it was up to their STEM teachers to decide whether to bring in a speaker. The event took place over the course of two days and no freshman parents were allowed to attend to accommodate parking.

Although these changes succeeded in driving up student attendance, they fell short when it came to living up to the spirit of a symposium. Taking away students’ ability to choose meant taking away from their joy in diving deeper into STEM, something tjSTAR has advocated for since its inception.

Although a fair number of teachers brought in speakers, students found themselves placed in presentations for which they did not sign up. Moreover, since they couldn’t fill their own tjSTAR schedules, students experienced imbalances that disrupted their day and made the tjSTAR experience uneven for participants. Some students found themselves listening to IBET or senior presentations in back-to-back blocks with no break in between, while others didn’t even have the chance to listen to a single presentation during any of the two days. In previous years, students could put some variety in their schedule, mixing different presentations with hands-on activities. Maintaining that healthy balance this year was left entirely up to chance.

The presentations themselves often fell short on time, which in itself was not a problem. The issue was that some teachers were unsure of what to do with students once these presentations were complete. Several senior and freshman presenters returned to their classes, while others remained where they were from anywhere between 30 minutes to an hour, in most cases, doing nothing academically productive. Astonishingly, some were even kicked out to the commons in order for teachers to continue their classes. The overall lack of direction given to students and teachers when presentations were complete resulted in a disorganized atmosphere.

The lack of supervision by the organizers of tjSTAR was also apparent during the keynote speech. Though it is intended to be one of the most highly anticipated aspects of tjSTAR, the event drew criticism and was especially controversial after several students during the question and answer session directed rude, inappropriate and personal questions and comments towards the guest speaker.

The absence of clear guidelines was also present outside of the auditorium as numerous teachers throughout the building did not broadcast the event in their classrooms. Instead, many students and teachers took advantage of the time, intended for a live stream of the speech, as a study hall period where many students soon became idle and academically unproductive, which begs the question: does tjSTAR need a keynote?

Throughout this past year, the tjSTAR committee justified their changes as a means to curb the lack of student turnout in previous years. Based on our personal observations of this year’s tjSTAR, the committee did ultimately achieve this goal. As opposed to the 400 absent students at last year’s tjSTAR, significantly fewer students chose not to attend school on the two days of tjSTAR, and classrooms were filled as usual. However, in accomplishing this change, tjSTAR failed to fulfill its original intent: to foster the spirit of scientific discovery and sharing.

An alternative solution to resolve the persisting tjSTAR attendance issue, while still fulfilling its original purpose would be allowing students the freedom of signing up for presentations to view, while offering an incentive for students to attend. For example, a small, required assignment could be handed out to students to turn in to their science teacher as a grade.

Additionally, the change from one day to two days of tjSTAR was nice in that students didn’t have to listen to presentations back to back for an entire day; this could still be incorporated in our proposed alternative version of tjSTAR. Similar to JDay, shortened classes could take place in the morning with tjSTAR presentations in the afternoon over a span of two consecutive days.

Overall, this year’s revised tjSTAR fell markedly short of expectations. However, because this was a “transition year,” it is our hope that those involved in the planning of tjSTAR will seriously take into consideration the feedback and suggestions of the Jefferson student body when preparing for next year’s event.